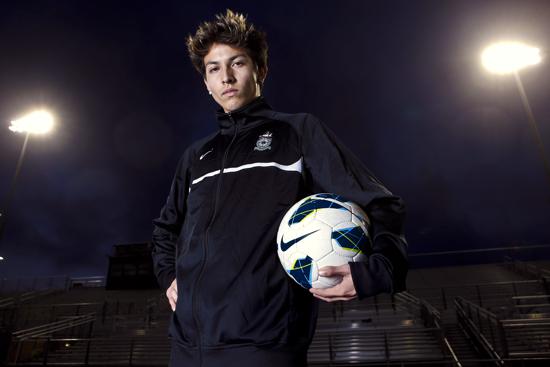 OCEANSIDE — To open last season’s San Diego Section boys soccer playoffs, Eddie Franco converted a deciding penalty kick for Oceanside High. Later, he recorded the only goal in a semifinal victory, and ultimately, he scored a golden goal to give the Pirates the Division II championship.

All along, Franco let one theme dominate for the seventh-seeded team.

“We knew that we had to stay focused the whole tournament,” said Franco, a forward now in his senior season. “We just kept in our thoughts that we just had to play our No. 1 game and stay confident.”

The Pirates (14-6-7) won their school’s first title since 2002 with a string of four playoff victories, each decided by no more than a goal, with conquests over three of the top four seeds.

Just a year before, Franco was named his team’s most improved player, gaining further playing time after spot duty on the varsity as a sophomore. Come his junior season, a championship foundation had been laid.

“It was my consistency and taking it seriously every day that contributed to last year’s victories and my own development,” Franco said. “I knew if I was consistent with my hard work, it’d contribute to something great.”

Like his overtime goal for a 1-0 victory over No. 4 Mater Dei in the finals. It came 10 minutes into overtime when he redirected a ball slapped away by the opposing goalkeeper to the bottom left corner on the opposite side of the net.

“We just stayed patient for that one chance because we knew that we’d only get that since our opponent was just so stacked against us,” said Franco, who finished with seven goals last season. “So when we had that chance, I put it all in my thoughts and finished it.”

As a forward from his start in youth soccer, the 5-foot-9, 145-pound Franco has become known for his speed to race and quickness to maneuver. For college soccer, he hopes to stay close to home, perhaps at San Diego State or Cal Poly San Luis Obispo.

“Eddie has that quick-fast combo that means game-changing speed, and he has the ability to finish (chances), as he obviously did under pressure last year,” Oceanside coach Frank Zimmerman said. “Also, he’s a good young man. I really think he has a big upside. He’s starting to play his best soccer.”

Franco spearheads a contingent of eight returning starters this season. Fellow senior Johnathan Najera also helps lead the attack, while juniors Angel Villalobos and Donovan Wilson anchor the midfield for the Pirates, who were off to a 2-0 start at midweek.

Graduation meant the loss of goalkeeper Rodrigo Sarmiento, who went to Oregon State after setting a school record with 15 shutouts last season.

Candidates for the assignment have been senior Kevin Knight and junior Jake Gerardi, also a receiver on the football team.

“You only win with your teammates,” Franco said. “You just can’t win with yourself because you have to pass the ball and connect with your players. It’s about everyone contributing and getting a victory together.”

As a result of last season, the Pirates are no longer underdogs.

“Being the defending champs, we have the responsibility to be our best,” Franco said. “We’re here to win again.”

With a forward who’s forward thinking.