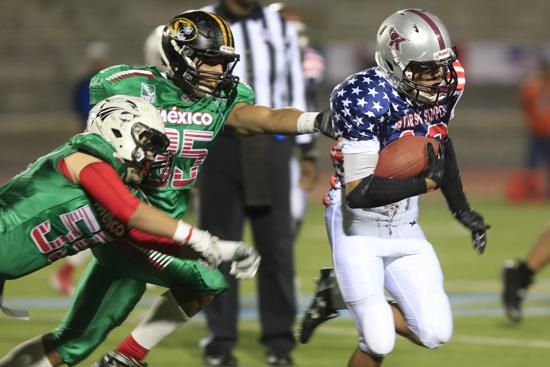 Takoda Browne of San Diego Stars and Stripes is chased by two Mexican defenders in the American Bowl on Friday at Otay Ranch High.

CHULA VISTA — Camaraderie is a term often bandied about a battlefield or a rugby pitch.

It became the unexpected credo for the San Diego Stars and Stripes this week as they prepared to play Mexico’s U19 National Team in the inaugural American Bowl football game Friday night at Otay Ranch High.

“It’s been a great experience,” Castle Park lineman Alberto Olmos said. “I didn’t know anybody out here before we started (practicing on Monday). Now I have a lot of new friends.”

Stars and Stripes is an all-star collection of San Diego Section seniors put together by volunteer coaches Derek Dahlen and Cree Morris and organizer Ruben Sanchez of Inter-Californias Youth Athletic Association. Mexico, which flew to Tijuana from Mexico City on Thursday, is preparing for the 2016 U19 World Championships in China.

Most all-star games are about rewarding seniors and letting them show off for college coaches and possible scholarships. This unique “friendly” added an international flair.

“For me, having played rugby against international competition, this was a great opportunity to put together something special,” said Dahlen, whose small organizational team had about 45 days to piece together this complicated project.

The evening began with Nix White and his Frog-X precision parachute team jumping from a Cessna 206 at 4,500 feet and soaring onto the field waving large flags of Mexico and the U.S. White, a retired Navy SEAL and former member of the Navy Leap Frogs, said his four-man crew has executed more than 25,000 jumps combined. Frog-X will perform at the Holiday Bowl later this month.

Next, there was Agina Alvarez flawlessly performing the national anthems of both countries. Alvarez, 26, who lived in Chula Vista for 10 years as a child, is a popular singer/actress who has made numerous appearances on NBC’s “The Voice” as well as “La Voz” in Mexico.

Speaking on behalf of his teammates, Takoda Browne of Kearny said, “It’s an honor to have been selected. I never pictured myself playing against another country. This is awesome.”