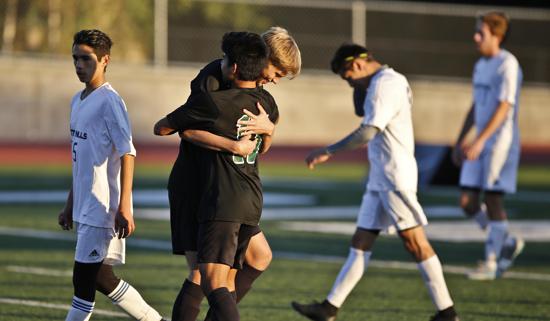 The host Pirates took the Classic Division championship as Daugherty had an early second-half goal to break a scoreless tie and then added an assist to trigger a 3-0 victory over Granite Hills on Thursday.

“It was really good to bring it for the team,” said Daugherty, a junior, who had a goal and two assists in a 5-0 semifinal triumph over Coronado the previous day. “We’re a good family, and that’s why we wanted it so much.”

In three pool-play games, the Pirates (6-1-2) managed to score just one goal, yet still went 1-1-1 since they only gave up a single goal while making the move up to one of the four elite brackets this season.

“Our team wasn’t used to playing at the high level,” said junior Angel Villalobos, who assisted on the first goal in the final. “Then we caught our rhythm and just went from there. This all builds up, and we want to strive for more this season.”

A year ago, Oceanside won the tourney’s Premier Division title as a springboard to winning the San Diego Section Division II crown. This season, there are eight starters back in the quest for a repeat section title.

“We came on strong last year,” Daugherty said. “We were young then, and now most of us are juniors, so we’re getting stronger.”

Kevin Knight and Jake Gerardi alternated by half in goal for the Pirates throughout the tourney.

Daugherty bounced a shot into the near right corner seven minutes into the second half for the first goal against Granite Hills (10-3-3). From a similar spot, he assisted on a goal by Arturo Rocha with 12 minutes left.

Rocha added an assist of his own on a goal by Conrado Barahona in the first of two added minutes..

“Promoting ourselves (in the tournament) and winning it is an achievement that’s very pleasing,” Oceanside coach Frank Zimmerman said. “I’m proud how our boys persevered.”

The Eagles played in their third tourney final of the season, including a title in the early-season Parker Tournament. Granite Hills goalkeeper Arthur Nosratpour had five saves.

In the West Division, Torrey Pines (9-0-1) topped San Pasqual 3-2 for the championship in its second straight finals appearance in the event. The Falcons overcame a 2-1 halftime deficit.

Other elite titles went to Los Alamitos and Santa Margarita.