Warner of Mission Hills, Alves of St. Augustine to compete against top seniors from East 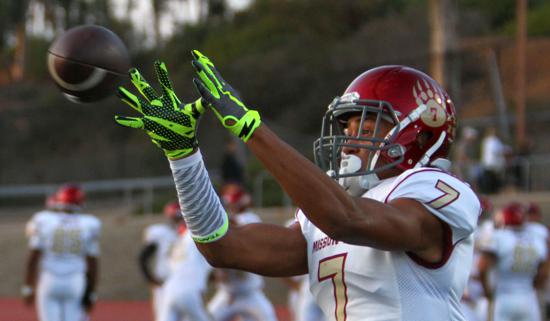 Troy Warner will get a chance to play both ways. Michael Alves will stick to offense.

Both athletes are looking forward to representing the West in Sunday’s fifth annual Semper Fidelis All-American Bowl at the StubHub Center in Carson against the best graduating prep football players from the East.

“This has been an excellent experience,” Warner said by phone after Thursday’s practice. “We’re competing with and against some of the best players in the country.

“This is absolutely the most talented group of guys I’ve ever seen. Guys from USC, LSU, Ole Miss. It’s pretty unreal.”

Warner, a defensive back-receiver from Mission Hills, has committed to play next season at BYU.

All but a handful of the 100 players in the Semper Fidelis game have committed to programs in the Power 5 conferences.

“I’m so glad I accepted the invitation to play in this game,” Alves said. “Every one of our linemen are going to play at big-time Division I schools.

Despite his size, Alves moves well. He opens holes on offense and plugs them on defense. He even lined up at fullback on goal-line and short-yardage situations for the Saints.

“That was a lot of fun, but I don’t see that happening in college,” Alves said.

“Offensive guard is my strong point. I have shorter arms, and I lack the explosiveness to play on the defensive front.

“I’m much better suited to be an offensive lineman.

“The guys here can’t believe I played at an all-boys high school. But I wouldn’t trade my experience at Saints.

“The coaches there taught me all I know. They prepared me for the second level.”

Warner said he’s been promised a chance to go both ways at BYU.

Warner had five interceptions on defense for Mission Hills, returning one for a touchdown. He had 27 receptions for 546 yards and five TDs as a receiver for the Grizzlies.

“This whole thing has been absolutely first class,” Warner said. “The hotel (the Hyatt in Garden Grove) is first class.

“The food is great and there is plenty of it.

“There are big screen TVs so we can hang with our teammates and watch the college games.

“This is a super-cool bunch of guys. We’re working hard to beat the East.”

The Semper Fidelis All-American Bowl kicks off at 6 p.m. Sunday and will be televised on Fox Sports 1.

Alves and Warner said they will not play in the Alex Spanos All-Star Classic in San Diego. In an effort to attract more scholarship players, the Spanos Classic has been moved from July to Jan. 16. The game at San Diego Mesa College will kick off at 6 p.m. Jason Texler of San Marcos will coach the North. Chris Thompson, who took Bonita Vista to the state finals, will coach the South. Thompson was named the San Diego Section Coach of the Year.