Timberwolves veteran leaves the paint, gains confidence in shooting from the perimeter 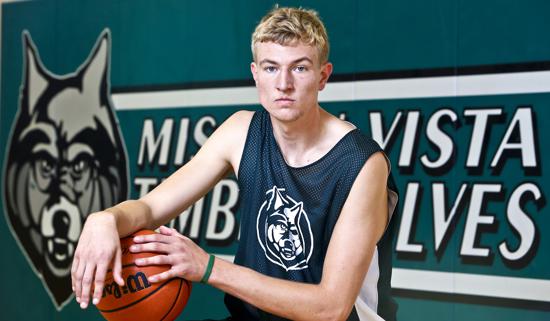 In his fourth year on the Mission Vista varsity, Burke Twyman is averaging about 20 points a game.

VISTA — Burke Twyman grew up in basketball as a post player.

Virtually everything he did on the court began and ended in the paint. At 6-feet-6 and 200 pounds, he had the size for it.

Now, though, the Mission Vista High senior no longer limits himself to playing inside. Instead, he spends most of his time on the perimeter.

With each passing day, he becomes more comfortable with his new role.

“Every year in AAU ball in the summer, I noticed opposing players are getting bigger in the post,” said Twyman, who averages about 20 points a game for the Timberwolves. “I knew I had to get out of there.

“It’s good to have post experience in case I get stuck down there in a game, but it took me one whole summer to get comfortable outside.”

Thanks to some coaching by Twyman’s grandfather and uncle, his outside shot improved after countless hours of shooting jumpers by himself.

“I had to shag the misses,” he said, sheepishly. “That was punishment for missing.”

Twyman is the first player in school history to score more than 1,000 career points after a less-than-thrilling debut on the varsity three years ago.

He scored one point in the first half of that game — and that led Mission Vista in scoring.

“We got drilled about 80-20,” recalled Twyman. “I figured it couldn’t get any worse than that.”

Mission Vista, which began last week 8-3, won five games when Twyman was a freshman. The Timberwolves had seven wins each his sophomore and junior seasons.

“I went to Mission Vista for the academics, so if anything good happens in basketball it will be an added bonus because I wasn’t expecting a lot anyway,” Twyman said. “My class will be the first one to go all four years.”

Twyman, who is still undecided about college next year, also owns the school records for points and rebounds in a game. He scored 39 against Tri-City Christian, snapping his record of 30 points set a few days earlier. He also collected 20 rebounds that game.

“I was hoping he’d reach the point he’s at right now by the time league play starts,” Mission Vista coach Davion Samber said. “He’s been a man on a mission.”

Twyman’s two younger brothers are also basketball players along with his dad, who played in college.

“We all love to shoot hoops,” said Burke, who said he may try out for the Mission Vista boys volleyball team that might be forming this spring. “Right now I am the champion, but Cade is catching up. Once he starts hitting jumpers consistently then it will be a challenge.

“He’s more athletic than I was as a freshman.

“I can’t wait to see what kind of player Aden becomes. He’ll throw passes most of my teammates can’t even handle.”