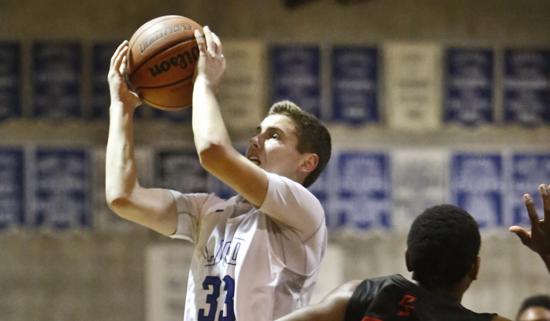 The No. 5-ranked Torreys surrendered the game’s first 12 points, then rallied for a 61-57 win over Woodland Hills El Camino Real to give San Diego a win in the event at Lincoln High.

“Being off for a week was good,” said Torreys coach Ryan Meier. “We got some guys well, got in some good practices. But we were out of synch early.

“We have a lot of good players and it was just a matter of getting in a groove, finding the right combination of players.”

That’s when LJCD senior Bruce Edwards took charge, grabbing two of his 12 rebounds in the last five seconds as well as making a free throw.

“How great a player is he?” Meier said.

Edwards, who received his first scholarship offer from San Diego Christian this week, finished with 20 points.

Torrey Pines 79, Sweetwater 45: Filling in for Los Angeles Venice, which informed organizers late in the week it had to bow out, Torrey Pines went on a 21-0 run to start the second half and cruised to a win. Jackson Strong had seven 3-pointers for No. 3-ranked Torrey Pines (12-3) and finished with 23 points. Torrey Pines outrebounded the Red Devils 38-20. Sweetwater dropped to 2-9.

Pasadena La Salle 54, Horizon 42: Pressing from the start, La Salle (10-5) forced 26 turnovers. Horizon (3-10) had a nine-point halftime deficit down to three in the third quarter, but La Salle quickly pushed the advantage back to seven. Phillip Willis had 11 points and 11 rebounds for Horizon. Christian Oyie-Little led La Salle with 15 points and 16 rebounds.

Los Angeles Dorsey 62, Morse 50: The Tigers (8-6) led 26-22 at the half, but were outscored 20-5 in the third quarter and fell to a super-athletic Dorsey team (13-6). Justin Davis was a monster on the boards for the Tigers, finishing with 20 rebounds to go with 19 points. He scored nine of his points in the fourth quarter to keep Morse in the game.