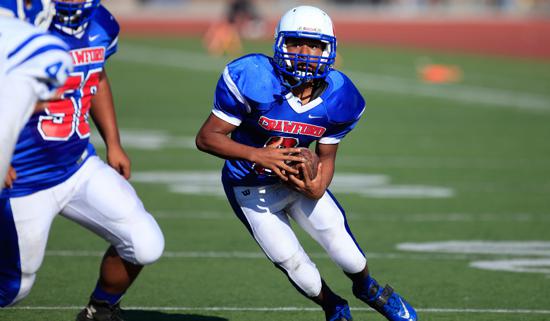 After three years in the Manzanita League, the Crawford football team is coming back to the City Conference.

You might need a scorecard to keep track of the high school football leagues this fall.

Reasons for the changes vary, but the goal is to create a level playing field for as many teams as possible.

North County is going from four leagues in football to three to help schools with scheduling. More league games means fewer nonleague opponents must be found.

After the North County Conference decided on a three-league alignment for football and four leagues for all other sports, Orange Glen petitioned and moved to the Coastal League.

The Patriots, who have had trouble competing in some sports, feel the smaller enrollments of the Coastal League are generally a better fit for their teams, especially football.

The Metro Conference is staying with three leagues for football, but moving to two for all other sports.

Joe Heinz, coordinator of athletics for the Metro Conference, said the conference’s diverse demographics make for different levels of competition.

The leagues in all sports “will be built off the CIF power rankings,” Heinz said, and leagues will change yearly instead of every two years as they do in most conferences.

The City Conference will also realign its four leagues for football.

Scott Giusti, director of athletics, PE and health for the San Diego Unified School District, said football used the power rankings to determine leagues and recommended all sports use that method.

After three years in the Manzanita League, Crawford is returning to the City Conference.

The Colts left the City to get their football program in order. That was accomplished as Crawford won the Manzanita League title and finished 10-3 overall, losing 21-7 to Coronado in the section Division V title game last season.

The City, like the North County Conference, will releague every two years.

Here is what the City leagues will look like for the 2016 football season:

The City Conference leagues will be called City, Central, Eastern and Western, but names have not yet been assigned.

The tentative Metro, with a possibility that Mater Dei Catholic will move up: