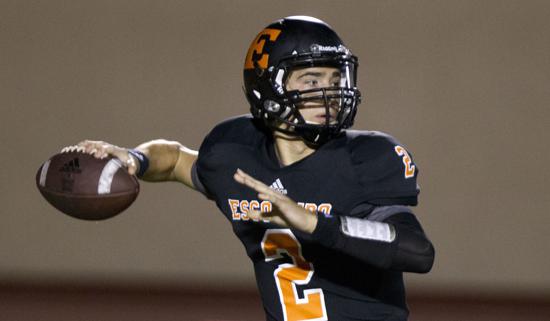 Escondido has played more than 100 years of varsity football.

Escondido High, which will play its 118th football season in 2016, has hired Jud Bordman as head coach.

Bordman teaches photography at Escondido, is the yearbook adviser and is in charge of Cougar University, the school’s before- and after-school activity program.

He has been at Escondido High since 2008, served as the defensive coordinator for two seasons and coached the linebackers, offensive line and special teams last season.

“This is my first head coaching job, and it has been 15 years in the making,” said Bordman, 39. “I’ve always wanted to be a head coach, so this is the culmination of a lot of work and preparation.”

Bordman played one season of football at Washington State before transferring to the University of Portland, where he threw the javelin.

He started his coaching career in 2000 at La Costa Canyon, working four years under Darren Brown.

After a stint with Nike’s Sparq program in Oregon, he returned to San Diego, working for Chris Hauser on the staff at Mission Hills. He moved to Escondido, working for head coaches Paul Gomes, Jason Texler and Steve Bridges.

Bridges, who is also Escondido’s athletic director and golf coach, stepped down as football coach after posting a 10-32 record in four seasons. The Cougars are 15-47-1 since their last winning season in 2009.

“The record doesn’t show it, but Steve Bridges had the program headed in the right direction,” Bordman said. “I’ve been fortunate to work for quality men and coaches. They’ve helped get me ready for this.

“I really love this school. I’ve listened and learned over the years and understand the great tradition at Escondido High.

Escondido’s selection committee interviewed seven men for the job before settling on Bordman.

“We had a good pool of candidates,” Bridges said. “Jud’s a good guy and a good coach. He has done a great job with whatever task he’s been asked to do — in football and the classroom. He has embraced the school and its traditions.”

The Cougars were 1-10 last season under Bridges, but he said he had a great group and pointed out only two of the more than 50 players on the varsity quit.