El Camino puts on a road show at LCC 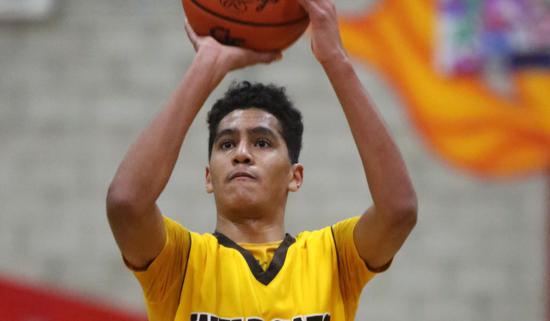 CARLSBAD — Winning on the road is never an easy assignment, but it’s the key to winning league championships.

El Camino came away with a big road win Friday night, beating La Costa Canyon 70-58 thanks to a 29-13 effort in the fourth quarter.

The fifth straight victory by the No. 6-ranked Wildcats (16-4, 2-0) keeps them in first place in the Avocado West League basketball race.

“We moved the ball so much better and we packed it down on defense in the final quarter,” said El Camino sophomore Jalen Flanagan.

The Wildcats, who had dropped 12 of the last 15 meetings to La Costa Canyon, collected 22 turnovers for the game while committing just five.

“I’ll take 22 turnovers any night the rest of the season,” added Flanagan. “That’s the most we’ve had in a game this year.”

That helped offset a slow shooting night from the floor. Just 11 of 31 in the first half, the Wildcats went 14 of 27 after intermission to maintain the lead the rest of the way, though La Costa Canyon (11-8, 1-1) sliced the deficit to just four points several times down the stretch.

Flanagan scored nine of his game-high 22 points in the final stanza as El Camino hit 14 of 16 free throws.

“We knew this would a tough place to play,” El Camino coach Tom Tarantino said.

“They kind of made more mistakes with the ball than an LCC team normally makes. Hopefully, we had something to do with that.

“We wanted to force them out of their offense and we did that.”

El Camino led just 13-11 after the first quarter before taking a 27-20 lead at halftime.

La Costa Canyon sliced one point off the deficit in the third quarter, but couldn’t find enough offense when rallying to trail just 49-45 with 4:50 to play.

In support of Flanagan, seniors Eric Pierce added 18 points and Luke Arvidson tossed in 15 for the Wildcats.

“Jalen was our most poised kid all night,” Tarantino said.

“We sat on jumpers too much at the start. We finally started running our offense and got them in foul trouble.”

Junior Christian Gallagher was the lone LCC player in double figures, scoring 13 points off the bench at guard.

Senior Geoff Newcomb hauled in nine rebounds for the Mavericks.