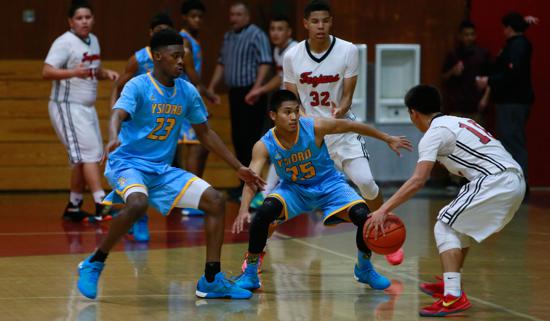 At San Ysidro High, there’s one piece of machinery so outdated it might as well be tossed aside with the abacus, pay phone and typewriter.

“We heard it go off once and thought, ‘What’s that?’” recalls senior guard Jerome Baldwin.

Mission accomplished. The Cougars are 17-3, average 74 points a game and produce more turnovers than any South Bay bakery.

“I try to get them to think fast and play fast,” says Tucker. “I just think the faster you can play, the easier the game is for the kids. You don’t have to stop and think. They can just react and play.”

The Cougars employ their helter-skelter style despite dressing just eight players. In the first half of last Wednesday’s 94-36 rout of Chula Vista, the team was down to six warm bodies. Guard Aaron Williams was off on a Tucker-approved family vacation to Cancun, then 6-9 post David Meza limped off with a sprained ankle.

“We’re the Marines,” says Tucker, a retired Navy lieutenant. “The few, the proud.”

The Cougars love their less-is-more philosophy, their in-your-face style of hoops, the sweet UCLA powder blue on their unis.

“It’s a beautiful way to play,” says Baldwin, a 6-3 guard with a voice so deep he could audition for radio voice-overs.

Then Baldwin delivered a lyrical line he admits he stole, like an inbound pass, he believes from ex-Ravens linebacker Ray Lewis:

A year ago, the Cougars posted a 16-13 record and were bounced out of the first round of the playoffs. That team centered around 5-10 Lynard Steward, who scored a whopping 25.5 points a game.

Regarding the eight-man roster, Perry says, “It’s great. It gives us more playing time. Our chemistry is better. We have fewer players, so we know how each other plays.”

Despite their frenetic playing pace, the Cougars seldom tire because of the team’s intense conditioning. In addition to weightlifting, there are runs up and down a steep hill just off campus, plyometrics atop an old wooden desk and frog hops up and down the court.

They do get tired, sort of, about not being ranked in the San Diego Section’s media poll top 10. In the power rankings, San Ysidro is No. 6 in Division II.

“Honestly, it does offend us,” says Baldwin. Then the guy with the bass pipes executed a backdoor cut, reversing direction and adding, “It doesn’t offend us a lot. Whenever we play together as one unit we can beat anybody in San Diego.”

“For us, it’s just noise,” Lumaban says of the snub. “We definitely read the papers. We see we’re not a top-10 team. We’re used to playing the underdog role.”

The team is motivated by something much more powerful than disrespect. Sophomore Jesus Garcia, a 6-10 post, played six games then had to quit for the season because of a serious medical condition. Garcia’s family has requested privacy about Jesus’ health.

He averaged 10.3 rebounds and seven blocks per game.

“It’s tragic,” says Lumaban. “You never want to see someone as close to you like that have something taken away. It hurts.”

“I’m just there for him mentally as a friend and teammate,” says Perry.

To a man, the Cougars say they are dedicating the season to their fallen teammate.

“We made him a promise,” says Tucker. “We told him at the end of the year we’re winning the CIF championship, then handing him that trophy.”