Starting from the ground up at Olympian 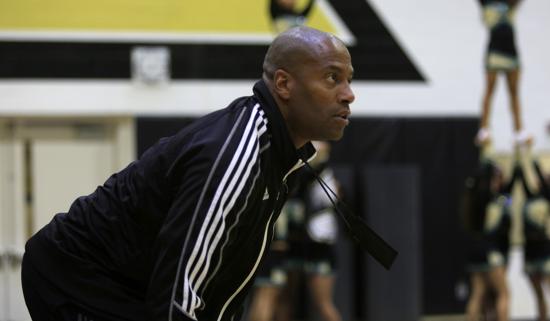 Olympian High varsity boys basketball coach Marty Ellis took El Cajon Valley to a title. He wants to do the same with the Eagles.

At the conclusion of the 2014-15 high school basketball season, El Cajon Valley High boys coach Marty Ellis was on the top of the hoop world.

A renovation project that had started six years earlier had helped produce the first San Diego Section boys basketball championship in the school’s 60-year history with a 61-49 victory over Valhalla for the Division III title.

Though the Braves would drop their Southern California Regional state playoff game the next week, the loyal fans gave Ellis and his team a standing ovation as the clock wound down.

With two key players returning, it looked like Ellis was positioned to keep the program rolling for years to come.

Then he shocked everyone with the announcement that he was taking the same position at Olympian High in Chula Vista.

Though the school was much closer to his home, the main reason is the former Monte Vista High standout likes challenges, and he felt it was time to see if he could work his magic elsewhere.

Olympian certainly fit that bill. The Eagles won just six games in 2014-15 and Ellis would be the players’ third coach in three years.

“We won six games my second year at El Cajon Valley, and we’ve already won six this season, so we’re a year ahead,” said Ellis of the Eagles who were 6-14 to start the week. “That second year I dropped nine seniors from the team. I’m huge on making statements but I wanted to take El Cajon Valley where they’d never gone and that’s what I want to do here.”

“The kids, they’re the same anywhere,” said Ellis who has just three seniors on the team, including leading scorer Jerome Hoover. “But here most of the players have two-parent families while at El Cajon Valley they were one-parent families. These kids come with $200 shoes, and I was able to raise $10,000 with our spirit packs.

“At El Cajon Valley we had to beg the community for support and thank goodness for people like Sol Price (remember Price Club?) who were major contributors.”

The community got together to buy the team championship rings, which Ellis proudly wears every day.

Another difference: When the Braves opened the gym doors for the first practice, Ellis says 20 players walked in. At Olympian it was 46.

“It’s very competitive here and some of the players even have their own trainer,” said Ellis. “We’re guard deep right now and that determines how we play. The difference is that none of the players’ positions are safe. If you don’t want to do the work, there are plenty of players to take your spot.

“At every school you have to work with what you have, but here we have more players so it’s way more competitive.”

As a result, the players at Olympian have to be a little more aggressive, which will pay dividends down the road. Now, however, they’re still adapting their game to his system.

Mind you, Ellis hasn’t exactly lost touch with his former team. He continues to work daily in the Special Education Department at El Cajon Valley High.

“They kid me, they say, ‘Why did you do it coach, really?’ and try to give me a bad time,” Ellis said. “I guess what I miss most are the late nights. I’d stay as late as those kids wanted me to stay and many times it was all night. They had nowhere to go and the gym was home.

“Don’t get me wrong, it was a hard decision, but it was the right decision. I’m telling the coaches around here to get us now, because we’re losing just one starter and in the coming years, we’re going to be hard to beat.”