Generations of excellence at San Pasqual 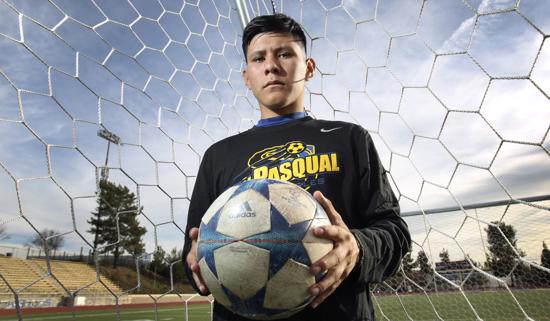 Instead, Mejia is living up to the family name established by his uncle, Omar, who played on the Eagles boys team that won the 2010 San Diego Section Division I championship.

Providing cheers for Omar was his nephew, who received an indoctrination to the tradition of excellence at San Pasqual, which also claimed the 2013 crown in his freshman year.

In addition to his uncle, Edgar also knew friend Zach Salado from the 2010 title team. Given the relative closeness in age, the older players were like big brothers and mentors to Edgar.

“They just told me that everybody plays their own role and that the (team) chemistry has to be there in order to win,” said Edgar, a forward in his third varsity season. “It can’t be just one person. The whole team has to put in the effort.”

Now the younger Mejia has inherited the role of a senior leader for the varsity underclassmen that include his freshman brother, Jesus.

“I want to set an example for them,” Mejia said. “They can take it to heart like, ‘I want to be like him.’”

Mejia can usually be found at the school field on weekends practicing free kicks with a couple of friends. Such work has paid off especially this season.

In the midseason SoCal Classic tourney hosted by Oceanside, the 5-foot-6, left-footed Mejia converted free kicks on each of three straight days. As a highlight, he connected on a 40-yard attempt late in a 1-0 victory over Concord De La Salle.

Those goals alone exceeded his total of two last season. Mejia had 11 goals by the middle of January for the Eagles (8-4-4), who stand No. 2 in the section Division I power rankings.

“Edgar’s really a dynamic player,” San Pasqual coach John Burson said. “He definitely sets the tone, and our offense goes through him. Also, he plays with a toughness that a lot of kids don’t. He’s very determined and doesn’t back down from any challenges.”

That was certainly the case when Mejia earned a varsity spot as a sophomore and then contributed coming off the bench much of the season.

“It was commitment and hard work then, proving to the coach that you’re able to play on the team,” Mejia said. “I wasn’t 100 percent sure that I’d make it, but I tried to outwork the other players and win a spot.”

Mejia stepped into the starting lineup last season, yet despite a late surge the Eagles (6-8-7) missed out on the playoffs. The bright side was the experience gained by eight returning starters this season with a nucleus down the spine of the field.

Along with Mejia up front, junior Omar Rodriguez provides leadership at center midfield, and senior Aaron Poulx anchors the defense at center back while classmate Lenny Islas holds forth in goal.

Now, too, it’s time for Mejia to fulfill his senior goals at the school.

“My uncle won a championship as part of the tradition here,” Mejia said. “I want to take ownership on that, to keep on making good records.”

While making a name for himself, his team and family.