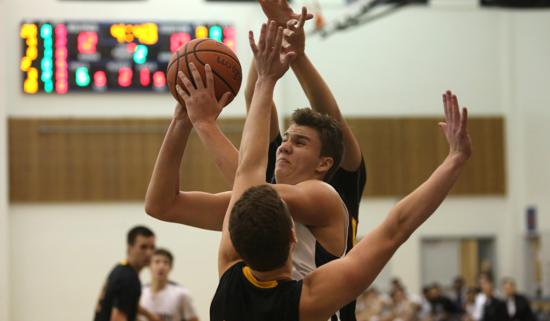 San Marcos’ Jason Simmrin, who averages about 15 points and four rebounds a game, drives the lane against Torrey Pines.

SAN MARCOS — Like most gym rats, Jason Simmrin loves being alone on the court, firing up jump shots and free throws, working on his moves.

The quiet time is refreshing to a guy like him.

“I can get away from everything,” the 6-foot-6 senior forward from San Marcos High said. “I can zone out everything in the world and work on my game.

“I just love being in the gym. I’ll stick around after practice and work some more.

“I even have keys to an unnamed local rec center that I use whenever I can.”

All that extra work away from the limelight has transformed Simmrin, who looks more like a linebacker than a basketball player, into a nightmare for opposing teams.

San Marcos coach Dante Carey, a guard when he played for the Knights, never hesitates to move his big man around, either down low or out on the perimeter.

“He’s a matchup problem,” Carey said. “Teams have a tough time figuring out how to guard him. He has a killer instinct.”

Put a smaller player on him and he’ll take him down low and score over him.

Put a big man on him and he can hurt you from the perimeter or make the big man move by driving to the basket.

“I like the challenge of going against a big man, like 6-8 or 6-9, to see if he can keep up with me,” said Simmrin, who averages about 15 points and four rebounds a game. “I have a little more freedom to go inside or out.

“I’ve figured out a way to make this football body work for me in basketball.”

There was a time when Simmrin played both football and basketball. However, once conflicts arose between the two sports, including with his club team, basketball became his sole sport.

This season the Knights are among the county’s best teams behind high-scoring Johnny McWilliams and Simmrin, who was named to the all-tournament team in the North County Classic.

Included in their wins this year is a victory over Torrey Pines in early December.

“When we’re in sync, I think we can go far this year,” Simmrin said. “If we stick to the game plan, we can be something special.”

Simmrin acknowledged that his favorite gym on the road is not that far away.

“Since sophomore year I’ve had good games there,” said Simmrin, who hasn’t decided what college he’ll attend but plans to major in business. “I don’t know why.