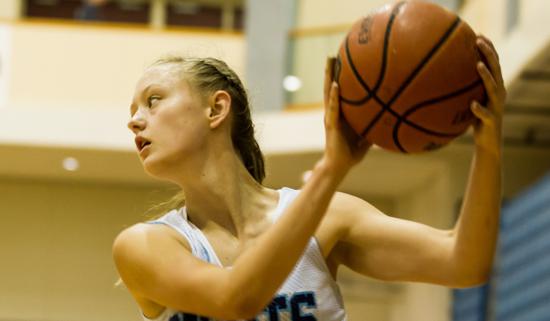 Poway’s Miranda Hernandez averages 15 points a game for Our Lady of Peace.

Miranda Hernandez has grown into quite a basketball player since she began playing for the San Diego Sol club team back in third grade at St. Michael’s School in Poway.

Her journey began slowly, playing in the post because she was three inches taller than anyone else in her class.

As teammates hit their growth spurts, it was obvious Hernandez would not be a post player much longer, so she had to learn how to dribble with both hands and shoot outside.

“I went from the post to a shooting guard over a span of about three seasons,” recalled the Poway resident. “We live on a hill, so the ball would roll down the street all the time.

“That was a good motivator to learn how to dribble better quickly.”

Now a 5-foot-9 junior guard at Academy of Our Lady of Peace, the new-look Hernandez leads the team in scoring with a 15-point average, good enough for No. 4 in the Western League.

Quite a turnaround considering she averaged 4.3 points and 2.8 rebounds per game as a sophomore.

She also tops the team in 3-point shooting and steals and stands third in rebounding.

But there is so much more than meets the eye when it comes to Hernandez.

Besides her accomplishments in basketball, which have raised her expectations about playing in college, she also participates on the speech team, does peer tutoring in history, math, Spanish and English, is a member of the student council and student athletic council and is president of the Fitness Club.

Her school day starts at 6:45 a.m. and most days she’s still behind the walls at OLP until almost 7 p.m.

“Finding the time to get into trouble is not something I’m looking for anyway,” Hernandez said. “I was looking for a challenge. I could have gone to a high school near my home, but I fell in love with OLP. Besides, I wouldn’t know how to go to school without wearing a uniform.

“A couple of us noticed a house across the street from school and joked that we spend so much time every day at school we ought to buy it.

“But it would never work out. There aren’t enough showers.”

Hernandez also coaches a girls basketball team at St. Michael’s near her home.

“I’m making them learn the same things I had to learn to get better,” she said. “It is really cool to pass on what you know that your coaches taught you.”

As if she didn’t have enough on her plate, she also took up lacrosse at OLP last spring.

“It feels weird to wear a skirt to play a sport,” Hernandez said. “Skirts and sports. Not the normal combo.

Known as “The Baker” at school, Hernandez brings cookies more often than not.

She even baked and brought a wedding cake to a party at the end of school last year.

“It was a Victorian sponge cake with strawberry butter cream filling,” Hernandez said. “I’m not normally a big cake eater, but I love frosting.”

While Hernandez has another year at OLP, she has already cast her attention to the horizon, hoping to continue her playing career in college

She plans to major in behavioral psychology.

“Playing basketball was just a way to get better at something,” she said. “I think I can play at the next level and I’ve looked at some schools in California and outside California.

“My parents want me to stay close to home. I just don’t want to go to a really huge school or a super small one either.”

Just a place where she can be as busy as she is now.