QB left South with Georgia Tech on his mind 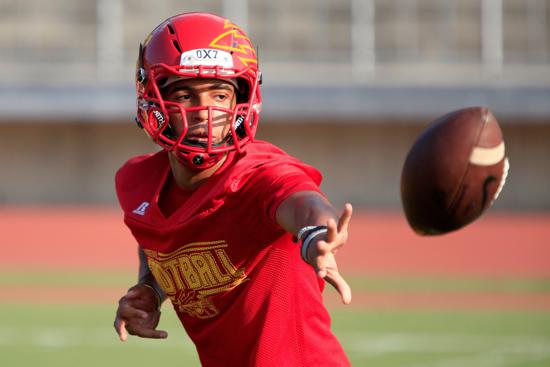 Lucas Johnson said he had every intention of playing football for San Diego State.

But when Georgia Tech kept calling, the Mt. Carmel High quarterback decided it might be worth his time to check out the Atlanta campus.

“At first I didn’t think anything of Georgia Tech,” Johnson said. “But they kept in touch, so I started looking things up, then decided to see if I liked it.”

What Johnson saw swayed him to decommit from the Aztecs and cast his lot with the Ramblin’ Wreck.

“I took a trip and fell in love with it,” Johnson said.

“I was at home almost immediately with the returning players. And the recruits who were on the trip with me were great.

“I was only there a couple of days, but we formed some really strong bonds.

“From a football sense, I could see myself spending the next five years there.”

Today, Johnson plans to sign a national letter of intent with Georgia Tech.

Big-time recruits changing their minds is nothing new.

Defensive back Troy Warner of Mission Hills committed to Oregon before switching to BYU.

Those are just a few players who have decommitted.

NCAA rules preclude coaches at SDSU or Georgia Tech from talking about Johnson until he signs a letter of intent.

“Telling the San Diego State coaches I had changed my commitment was tough, I mean really tough,” Johnson said. “San Diego State has built a good program, and I had built strong relationships with the staff and players.”

Air Force, Arizona, Arizona State, BYU, Cal, Colorado, Nebraska, Oregon State and UCLA are among the other schools that recruited Johnson, whose sister, Alix, was an All-America softball player at Arizona State.

The 6-foot-3, 185-pound Johnson, a three-star recruit on SB Nation, is the classic athletic, option quarterback.

San Diego State attacks behind running back Donnel Pumphrey with talk of moving to a read-option offense in the near future.

Georgia Tech had played in 17 straight bowl games, including the Orange Bowl in 2014 and 2009, before going 3-9 last season.

The Ramblin’ Wreck return senior quarterback Justin Thomas, who threw for 1,345 yards and ran for 488 more. Behind him is sophomore Matthew Jordan.

So Johnson figures to redshirt his first season.

“We ran a triple-option offense my freshman year at Mt. Carmel, so it’s not a new offense for me,” Johnson said. “Going so far away will be different.

“I’ll have to adapt. But I have an aunt who lives 30 minutes away, so I’ll have family there.

“The South is the heart of football country with the ACC and SEC. This is big-time college football. You really get a college-football feeling being on campus.”

Georgia Tech is an ACC team.

And the academics are beyond reproach.

Georgia Tech is ranked No. 36 among the nation’s best universities.

Johnson is looking to major in either engineering or business. U.S. News & World Report has the Georgia Tech engineering program among the top five in the nation.

Bloomberg has Georgia Tech’s MBA program No. 1 among public universities.

“But how can you fault a kid for switching from one great university to another?”