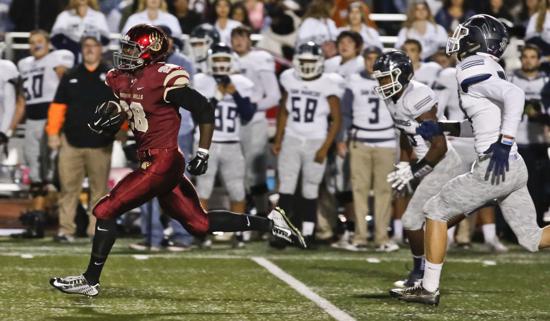 Eleventh-hour decisions are a gamble, especially when you’re rolling the dice on your future.

Nehemiah McFarlin and J.B. Hunter switched college commitments at the last minute. Both believe they did the right thing.

McFarlin, who rushed for more than 2,000 yards with 33 TDs in 2015 for Mission Hills, was set to attend USD. But Idaho State swooped in Monday and offered the running back a full-ride scholarship.

“It was hard to tell USD I was switching,” said McFarlin, a first-team All-CIF San Diego Section pick. “Idaho State called Monday and offered me. I had a day to make a decision that usually takes a month.

“USD doesn’t give athletic scholarships and worked very hard to get me financial aid. But it was still going to cost my family quite a bit of money to go there.

“Idaho State offered me a full-ride scholarship. I want to major in sports medicine, and they have a major in that. USD doesn’t. So I had to switch.”

The 6-foot-4, 265-pound Hunter was a second-team All-CIF selection for Oceanside. He made up his mind Tuesday to switch from Cal Poly SLO to Army.

“I visited West Point, and decided it was the place for me,” Hunter said. “I come from a military family, so I know the commitment it will take, but I’m totally ready to serve my country.

“The last four years at Oceanside have been a blast. I think I’m prepared both academically and athletically to make my family proud.”

Justus Te’i, an All-CIF first-team selection at linebacker at Mission Hills, chose Utah State after an eleventh-hour visit to Navy.

“Navy was amazing, a great opportunity,” said Te’i, who also had offers from San Diego State, San Jose State, Nevada and UC Davis. “But it’s a major, long-term commitment that I just wasn’t ready to make.

“Utah State is a great place. I’m very happy with my choice.”

Oceanside’s Isaia Paopao tore his ACL last spring, but came back to help the Pirates to the section Division I championship.

A two-way player — defensive back and receiver — Paopao signed with Sacramento State.

“Schools backed off after I got hurt,” said Paopao, who chose Sacramento State over Northern Arizona, Weber State and Montana State. “I think I’m a strong safety, but I’m going to get a chance to play both ways. It should be fun.”

Ramona quarterback Marco Cobian is headed to the University of Chicago while offensive lineman Grady Vasquez is a preferred walk-on at San Diego State.