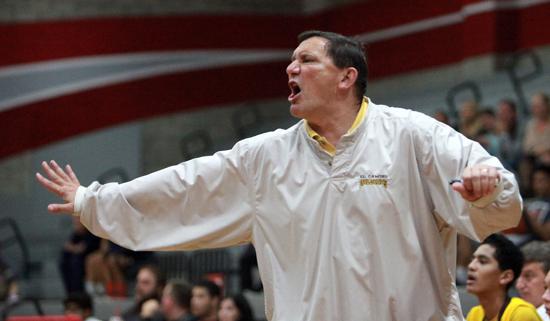 OCEANSIDE — Tom Tarantino has always surrounded himself with good people.

“Hire good assistants and let them coach,” said Tarantino, 55, now in his second year as boys basketball head coach at El Camino High and in his 20th year in San Diego County.

“I want input from my assistants — have an opinion on players, how practices are run, game strategy.

“I may not agree, but I want my assistants to weigh in.”

The seeds of that philosophy were sown when Tarantino played at Holy Trinity High in Hicksville, N.Y., for Bob McKillop, now the head coach at Davidson.

From those experiences sprouted Tarantino’s coaching tree, a tree with branches in New York and California.

“Tom is my basketball mentor,” said La Jolla Country Day head coach Ryan Meier, who served as an assistant under Tarantino at Carlsbad.

“He molded me into the coach I am. Flat out, bar none, he’s the best teacher around.”

Meier is in his 10th season at La Jolla Country Day with a San Diego Section Division IV title in 2011-12.

“Unless you’ve worked with Tom in practice, see how intense he is, how dedicated he is, but how he simplifies things, you won’t know how good he is,” Meier said.

“People enjoy being around him, gravitate to him. He has charisma.

“Certainly X’s and O’s are important. He adjusts his system to his players, not the players to the system. He let’s his players be players.

Arvidson — whose father, Phil, coached for Johnson and is now assisting Tarantino — is one of the leaders of this year’s El Camino team, which is 19-5 and ranked No. 5 in the county.

“He knows every player’s strength and weakness,” Luke Arvidson said of Tarantino. “I didn’t know him before he took the job here, but I learned his first summer that he was a man I could play for.

“His shooting workouts, his drills, his sprints, his intensity were all great.

“You realize if you want to get better, this is the man.”

Tarantino won a New York state championship at St. Dominic, where he was an administrator at camps run by then New York Knicks coach Rick Pitino.

After bringing his team to the Torrey Pines tournament for several years, Tarantino was lured to the West Coast, where he took the job at Carlsbad.

He won a San Diego Section Division I championship with the Lancers in 1999-2000, beating El Camino 59-57 in double overtime.

“I learned the pace of practice from Tom,” said Army-Navy coach Bobby Huggins, an assistant under Tarantino. “He doesn’t just run drills, he lets the players know what they mean. The drills are quick, run at full speed.

“There is no down time in practice.

“A lot of coaches have taken his knowledge, his philosophies and run with them.”

One of those is Kamal Assaf, who worked with Tarantino at Bishop’s, then led La Jolla to Division III championships in 2007-08 and 2008-09.

“I spent four years with Tom, and it was like going back to college,” said Assaf.

“Every good coach knows the game, but Tom is a wonderful educator.

“He gets kids to work hard and love it. Kids know he’s genuine.

“He’s there to make them better basketball players, but he’s also there to teach them how to be better sons, husbands and fathers.

“One telling thing is that when he took over at El Camino, Phil Arvidson and Todd Roerig — longtime, loyal Ray Johnson guys — stayed on as assistants.”

Arvidson has been at El Camino for 20 years. Roerig is in his 14th season.

“Todd and I, all El Camino basketball fans, are extremely happy Tom was available and took this job,” Phil Arvidson said. “He has been a perfect fit.

“He’s very easy to work with because he takes input. His energy is infectious. He goes nonstop.

Assistant Jim Fox became head coach at Appalachian State after 13 years as an assistant for Bob McKillop at Davidson.

Assistant Matt Niehues became the head coach at Bishop’s and won the Division IV title in 2010-11.

Assistant coach Sam Eshelman started the program at Sage Creek and is now back at Army-Navy as an assistant.