Kids ‘blown away’ by Colorado candidate 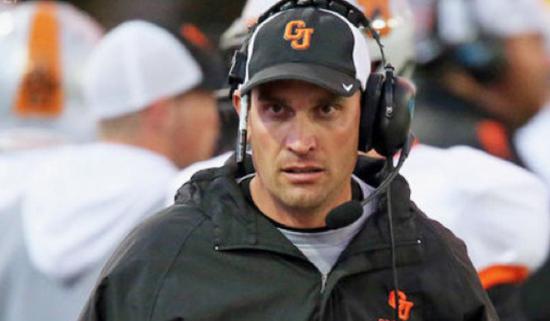 Robbie Owens has been the head coach at Grand Junction the previous eight years, compiling a 47-38-1 record.

The next day Baker was on a student panel interviewing Owens.

“I just saw you throw your first touchdown pass of 2016,” Owens joked at the interview.

That Owens, 42, attended the basketball game, plus knew Baker and other Helix football players by name impressed many.

“I think the kids were blown away,” said Helix Athletic Director Damon Chase.

Owens lands one of the most coveted coaching jobs in the state, the Highlanders having suffered one losing season in the last 40 years. The football program’s combined record since 1973: 372-115-11. Owens takes over for Troy Starr, who was 83-18-1 in eight seasons, winning two section championships and one state bowl title.

“I’m not here to make wholesale changes,” Owens said. “You don’t have to fix what isn’t broken. I want to add value to what already exists at Helix.”

Owens will teach at Helix, likely in physical education.

Grand Junction struggled to a 4-6 finish in 2014, followed by a 2-8 record last season. The Tigers faced the challenge of being isolated in western Colorado, often driving nearly four hours to Denver for games. The school is dropping to 4A next season. Back-to-back losing seasons didn’t deter Chase.

“We did our homework. We did our due diligence,” the athletic director said. “We talked to people about him. Grand Junction isn’t Helix (in regards to talent.) We feel he’s a good fit for our kids and our community.”

Owens was the head coach at Coconut Creek (Fla.) High in 2007, finishing 7-4. Prior to that he was an assistant coach for 11 seasons at Division II Colorado Mesa University.

Owens brought Grand Junction teams to compete against other California schools at USD summer camps in 2013 and 2014. It was through those contacts that he learned about the Helix opening.

While he served as a defensive coordinator at Colorado Mesa, he has focused on the offensive side as a high school head coach, running a no huddle power pistol attack. The Tigers averaged a combined 32.7 points the past six seasons.

Interestingly, Helix ran a similar offense under Starr, though the Highlanders typically huddled.

Owens has met with Friend and hopes to retain him.

Robbie Owens faces a big challenge stepping in as head football coach at Helix. A look at the Highlanders’ previous four coaches: