LCC ready for run at eight titles in row 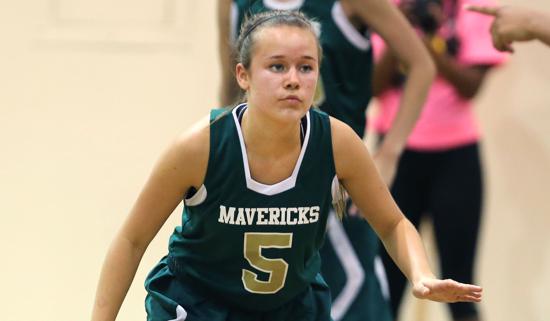 That will come Wednesday on Senior Night at La Costa Canyon as the league-leading Mavericks attempt to clinch the title against second-place Vista.

La Costa Canyon (18-8, 7-1) took care of the final step toward a chance at yet another league championship by downing host Rancho Buena Vista 65-44 on Friday.

The Mavericks have a string of seven consecutive league championships that will be squarely on the line next week.

“I don’t want to be on the team that snaps that streak,” LCC senior Jessica Curtis said. “We have T-shirts that have seven back-to-backs on there. I’d like to add an eighth one.

“I know all of our past teammates are rooting for us to get this done.”

Curtis did her part to keep the Mavericks, who dropped a 58-57 decision Feb. 3 at Vista, on target for No. 8 despite her team suffering through severe foul problems that at one point in the third quarter had three starters on the bench with four fouls each.

Curtis scored nine points in that quarter and added another seven points down the stretch to finish with 28.

“I never know how many points I score,” said Curtis, who also grabbed four rebounds. “My dad always knows exactly how many, but I can’t keep track during the game.”

When foul trouble hit, the Mavericks, now 17-1 against RBV in the last 10 years, managed to hold a lead of at least eight points as Curtis got it going.

“They came out with more energy than we expected,” Curtis said. “Once we ignored all the fouls, we got it going.

“I haven’t been on the court very much without Cassie (Amundson). I tried not to change my game much, just focus on the team and make some shots.”

Despite foul trouble, Amundson added 14 points while the Longhorns got 15-point performances from both Ambrezhe Farrell and Maggie Ross.

“We’re in a learning process with our younger players, but having Cassie and Jessica on the court really helps a lot,” LCC coach John Farrell said.

That formula has put the Mavs on the verge of No. 8.