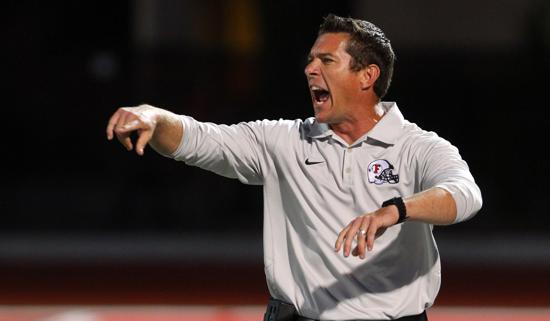 The job at Westview returns coach Kyle Williams to the Poway school district and the Palomar League.

Kyle Williams, who helped turn around a struggling Fallbrook program, has been named head football coach at Westview High.

“It was a difficult decision to leave Fallbrook because of the relationships I’ve built over the years,” said Williams, who played at Poway and was the Titans’ defensive coordinator for four seasons, including the section championship year of 2011.

“Getting back to the Poway district has been a goal, so when the Westview job opened, I jumped at the chance.”

At Westview, Williams takes over for Mike Woodward, who resigned after nine seasons. Westview was 48-53 under Woodward, including 8-4 last year, losing in the Division III quarterfinals.

After going 3-8 in Williams’ first season at Fallbrook, the Warriors won at least a share of the Valley League title in back-to-back years, going 7-4 in 2014 and 7-5 last season, losing to Mission Bay in the Division III quarterfinals.

“Mike Woodward did a tremendous job, and we were sorry to see him walk away,” said Westview Athletic Director Chris Carter. “But we feel we’ve made an excellent hire in Kyle Williams.

“There was a lot of interest in the job — on campus and off. Kyle stood out.

“At our school, coaches must be good teachers. And Kyle is an outstanding teacher.”

Williams, 35, is an English teacher.

“I challenge my players to be the best they can be,” Williams said. “So I have to be the best in the classroom as well as on the field. Good coaches are good teachers.

“Mike Woodward elevated the standard at Westview. Now I hope I can bring an energy and toughness that can take us to the next level.

“Westview has as much upside as anyone in the Palomar League. I welcome expectations because it pushes me to be my best.”