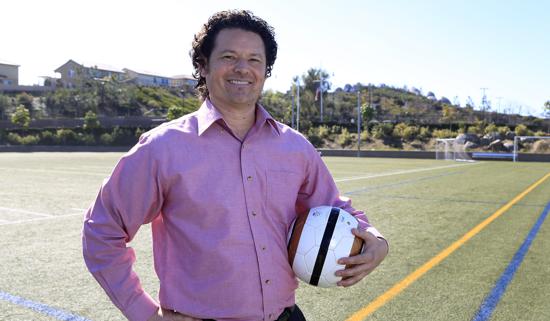 Evan Camperell is coach of the men’s and women’s soccer teams at Saint Katherine in San Marcos.

It also goes beyond the chance to reacquaint himself with people and places after two years away from the local scene.

At the forefront is that Camperell is the new coach for men’s and women’s soccer teams in their infancy at Saint Katherine College. So he’s seeking players to compete at a level unique for the North County.

“It’s very exciting,” said Camperell, who began his duties on Feb. 8. “I’ve been hitting the ground running since I got back in town.”

Camperell coached the Division II women’s team the last two years at Lincoln University, near Philadelphia. His target at Saint Katherine is to have the Firebirds ready for NAIA acceptance next year after competing this fall under guidelines of the National Christian College Athletic Association.

Starting a program is hardly new to Camperell, who did so with the NAIA men’s team at the University of Southwest in Hobbs, N.M., in 2003, and then again when men’s soccer was re-established at MiraCosta College in 2007 at the start of his four-year tenure.

“You can really take the program in the direction that you’d like it to go as it grows,” said Camperell, who can offer players some scholarship opportunities. “That’s great. For us, the student part of student-athlete is first and foremost.”

At Saint Katherine, the men’s team played an inaugural season last fall, so some returning players can be expected. The women’s squad is being formed for the first time with a core of eight current students who expressed interest in playing.

“I’m excited to see what Coach Camperell has in store for us and excited to see the team out on the field again doing what we love to do,” said Isaac Arenas, a member of the men’s team, who played club soccer as a youth in San Diego and Carlsbad. “To me, having a soccer team at Saint Katherine means everything.”

The school, which opened in San Marcos in 2011, gained some notoriety when its fledgling men’s basketball team lost by 83 points to San Diego State in 2013. That team was later disbanded, and now the Saint Katherine athletic lineup includes baseball and softball along with soccer.

Enrollment has been reported as high as 200 students over the years.

As for coaching two teams in the same season, that’s not new to Camperell. He did so at Alliant University in San Diego from 2004-06.

Camperell plans on holding back-to-back practices for the teams and having doubleheaders in many instances on game days. He is in the process of securing a practice site and determining a home field for games.

Players will be drawn from the prep and community college ranks principally from Southern California and perhaps extending to Arizona and Nevada.

“I like a team that’s tactically smart,” Camperell said. “We’re talking soccer intelligence and being technically skilled. Fitness, too, that’s a big topic for me.”

So he’s keeping an eye out for talent.