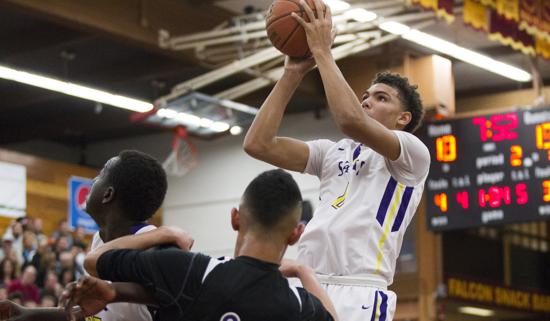 St. Augustine's Taeshon Cherry, shown taking a shot earlier in the season, posted a double-double in the Saints' win over Mission Bay on Saturday.

“The last two games, he pushed me around,” Cherry said. “I wanted to show him I could give him some body, too.”

With the Cherry scoring 12 points and pulling down 12 rebounds, the third-seeded Saints built a 13-point lead early in the fourth quarter and then withstood a late Mission Bay challenge to win 53-49 in the San Diego Section Open Division quarterfinals Saturday night.

The host Saints (22-5) will travel to Cathedral Catholic, a fellow Western League team that already owns a pair of wins in the parochial school rivalry, Wednesday night.

Cherry outplayed Ojunkwu, who finished with 10 points but only nine rebounds for the Bucs (19-8), who will play Poway for state-seeding determination on Tuesday.

For St. Augustine, the road ahead is perilous, as it will have to continue to play good defense to offset the loss of guard Otto Taylor, who suffered a knee injury when the Saints beat Mission Bay nine days ago.

Taylor, who averaged better than 10 points a game, was replaced by Jack Peterson, who buried a pair of 3-point field goals while scoring seven points. He drew the tough task of guarding Tulane-bound Justin Moore, who led the Bucs with 17 points before fouling out late in the game.

St. Augustine never trailed, though Mission Bay scrambled back from a 16-4 deficit to close to within a field goal at 18-16 before the Saints rallied.

Martin Tombe scored 16 points — all in the first half — to lead St. Augustine.