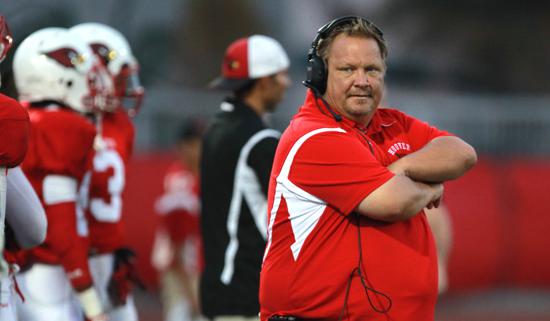 Jerry Ralph drives past the home of legendary Oceanside High football coach John Carroll every day on his way to work.

After being named head football coach at El Camino, Ralph will still drive by Carroll’s home but won’t have to jump on a freeway and buck traffic for 35 miles to work.

Ralph is leaving Hoover after four seasons to take the job with the Wildcats.

“I think El Camino is the No. 1 job in the county,” said Ralph, who has cut his drive to work down to two miles.

“I think the community is ready for El Camino to return to being the dominant El Camino of the Herb Meyer era.

“I love the traditions here. I love the fact the basketball teams, the track teams and the band are winners.

“I love the rivalry with Oceanside, Carlsbad and Vista.”

El Camino Athletic Director Sean Helgesen said Ralph has a history of success and the selection committee wanted a coach who could win right away.

“We have the kids in the program to win now,” Helgesen said. “Jerry is a proven winner, so it’s a most-important hire for credibility.”

Ralph replaces John Roberts, who was let go after a 14-12 record in two seasons, taking El Camino to the San Diego Section Division I final, losing to Oceanside in the title game.

“John Roberts did a good job,” Ralph said. “I want to take things a step farther.”

Ralph, 53, started his coaching career at Grossmont and was there 11 years as an assistant. He spent five seasons as an assistant at University of San Diego High before landing the head job at Santana in 1997, posting a 16-17 record in three seasons. The Sultans were 11-1 in his final season, losing to Oceanside in the playoffs.

He spent nine seasons as the head coach at St. Augustine, going to the finals four times, winning in 2005 and 2006. He spent a year at Del Norte, starting that program, then moved to Hoover.

“I think we changed the atmosphere at Hoover,” Ralph said. “Jimmy Morgans is a very good coach, and I think he’ll continue to build that program. He was a great choice.

“But the chance to come to El Camino, to cut two hours of driving time off my day, was just too much to pass up.

“I remember watching Herb Meyer win his first championship at El Camino in 1976. I was amazed at the size and speed of his teams.

“I remember how ferocious they were.

“That’s what we want to bring back.”

Two South County baseball teams will make a trip to the desert to play in a special doubleheader Friday at El Centro Southwest High. The event will honor the memory of longtime Imperial Valley coach Mickey Carter, who died last year.