From figure skating to hard-nose hoops

Westview senior left the ice in Hawaii, ended up in the gym 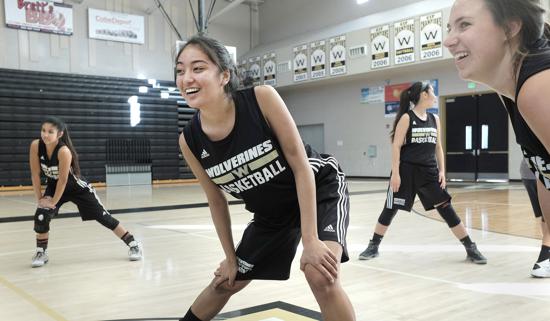 While living in paradise, Toni Magalei chose a sport that made most people giggle.

It has the same effect to this day on the 5-foot-9 senior forward for the Westview High girls basketball team.

Born on Oahu, Magalei did not take up surfing or snorkeling or even scuba diving.

No, she became a figure skater.

“There was one ice rink in Pearl City,” Magalei recalled. “I remember taking lots of classes. Not many competitions.

“I really liked the little skirts I got to wear out there.”

Magalei continued skating for two years after the family moved from Hawaii to the mainland before becoming so heavily involved in soccer she thought she’d play that sport in college.

“I can still skate straight ahead,” Magalei said. “I still have my old skates, but they don’t fit anymore.”

Basketball was never meant to be anything more than something to separate fall and spring seasons with her club soccer team.

Were it not for a torn ankle ligament in soccer, Magalei might still be on the pitch instead of in the Wolverines gym.

After the injury, she traded in her cleats for basketball shoes and earned a spot on the Westview junior varsity.

“I had so much fun on JV sophomore year I didn’t want to go back to soccer,” Magalei said. “I just love how fast a basketball game is. You warm up for an hour in soccer and you could play the entire game and never touch the ball and the game would end up being 0-0.

“You never have a 0-0 score in basketball. I decided to play basketball and see where it takes me.”

It’s taken her to a pair of playoff appearances in her two varsity seasons.

Averaging 11 points and 7.8 rebounds a game, she was named first-team All-Palomar League this year, quite an honor considering the toughness of the league.

“She’s one of our leading scorers, she rebounds, she plays defense against the toughest players around and she leads us in assists,” said Westview coach Bob McHeffey, whose team will advance to this week’s state tournament.

“Toni has been elbowed, run over, stepped on and knocked down. You can’t play the way she does and be afraid of contact or being tired or hurt.”

If there is a dangerous scorer on the other team, Magalei draws that assignment most times.

Magalei watches as much film as she can as part of her pregame preparation.

“In her first game against Campisano,” said McHeffey, “she outscored her 23-22. In the last game against McWilliam, she held her to five points. Casey scored 10 points in the first meeting.

“Against Destiny, she held her to four points in the first half.”

There’s no skating around the fact that Magalei will play at the next level.