Bonita Vista a home of champions 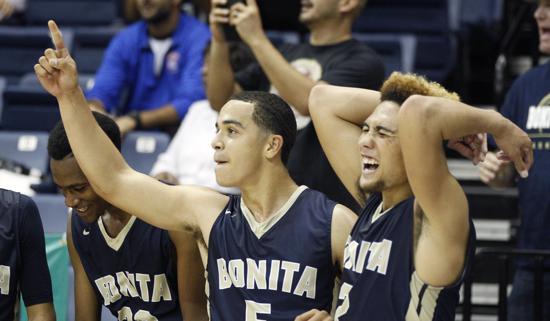 As the final seconds tick off, Bonita Vista's Quentin Harrison (left) and Atoa Fox start to celebrate their win over Madison for the Division III title.

It was a simple enough question, but Bonita Vista High’s Atoa Fox pondered and then thought some more.

A member of the Barons’ champion football team, he was asked which title meant more after his 18 points led Bonita Vista to the San Diego Section Division III basketball crown with a 59-44 win over Madison on Friday at USD’s Jenny Craig Pavilion.

“I like both a lot,” said Fox, more being honest than diplomatic.

So, since he signed to play football next season at Idaho State, wouldn’t that be a tie-breaker?

“Not really,” said Atoa. “The coaches said if I wanted I could play basketball.”

The Barons (20-12) came up one win short of a state title in football and with the victory are assured a Southern California Regional basketball playoff berth next week.

“I learned from football you can’t be satisfied,” said Fox, whose slashing drives to the basket, especially when he scored nine points in the third quarter, befuddled the Warhawks (19-13). “Everything is timing. I saw my teammates give me that look and I knew they were serious.”

That came after Madison outscored the Barons 17-11 in the second quarter for a 28-22 halftime advantage. Dominating the Warhawks 22-5 in the third quarter gave the Barons all the cushion they needed.

Another football star, Quentin Harrison, added 14 points and 10 rebounds for Bonita Vista while Terrell Carter led Madison in its final game of the season with 16 points.

The victory gave Bonita Vista its first basketball title since 1999 when the Barons beat South Bay rival Southwest 75-62 before a memorable crowd at San Diego State.