Dons win title with boost from the bench 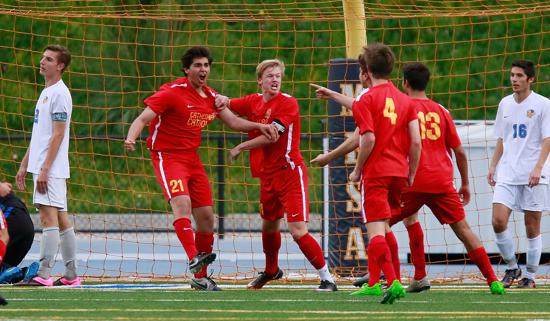 Cathedral Catholic’s Devon Granieri (21) celebrates with teammates after coming off the bench to score the first goal in the Dons’ 3-0 triumph over San Pasqual.

Though Devon Granieri didn’t start in the San Diego Section Open Division boys soccer final, the Cathedral Catholic junior got the Dons started on the way to a repeat title.

Granieri came off the bench and some 30 seconds later scored by converting a rebound to trigger a three-goal first-half outburst that lifted fourth-seeded Cathedral past San Pasqual 3-0 at Mesa College on Friday night.

“I was just there to finish it off,” said Granieri, a first-year varsity member, who converted in the 13th minute on a play that began with Grant Allgood’s header caroming off the crossbar. “It’s incredible (to win). Of course, we’re always striving to do our best.”

The Dons (14-6-2) added their second goal on a 45-yard free kick by Travis Schaniel in the 28th minute, and Nick Giacalone added his second goal in two games four minutes before halftime.

“We were in charge the whole game,” said Schaniel, another varsity newcomer this season. “We worked hard, and we deserved it.”

No. 2 San Pasqual (15-5-6) went down a player due to a red card midway through a second half tinged by four tussles also resulting in three yellow cards.

Dons goalkeeper Aidan Cerveny made five of his six saves in the first half.