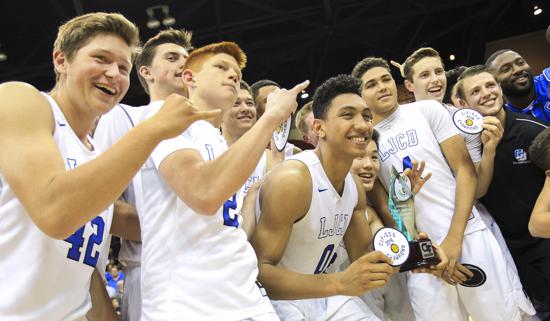 With Bruce Edwards holding the trophy, the Torreys are all smiles after clinching the Division II title.

As he sat in the locker room at halftime of the San Diego Section Division II boys basketball championship game, senior Bruce Edwards recognized the predicament La Jolla Country Day was in.

Once again, the No. 2-seeded Torreys trailed, this time by 10 points.

And as they have done most of the season, the Torreys roared back to victory, overtaking neighborhood rival La Jolla 66-61 on Friday at USD’s Jenny Craig Pavilion.

By the end of the game, La Jolla Country Day claimed the championship of La Jolla in addition its first section crown since 2012 by outscoring the No. 4 Vikings (19-11) by a 39-24 clip in the second half.

Not without Edwards, the lone senior on a team that includes five freshmen and three sophomores. He led the way with 17 points, nine rebounds and three blocks.

“It’s been a long four years to get here,” Edwards said. “From sleeping on friends’ couches to CIF champion is quite a trip.

“At halftime I realized we needed to make shots and, with such a young team, I needed to do this.”

Sophomore Alex Cho and freshman Ryan Langborg each scored 13 points for the Torreys.