Better late than never for Helix 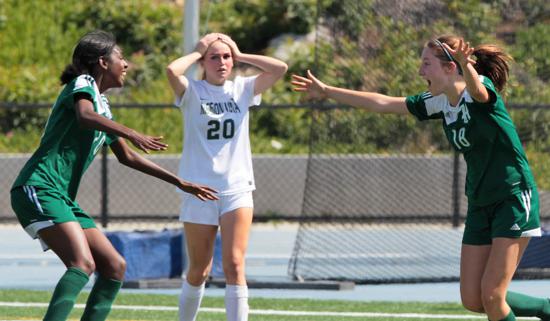 Helix teammates Dominique Banks (left) and Gabrielle Root celebrate the game's only goal, scored by Root on an assist from Banks. Mission Vista's Shayla Cottrell reacts to the play.

With under two minutes to go, after Helix dominated on the attack yet couldn’t convert, senior Dominique Banks figured it was time for the Highlanders to score in the San Diego Section Division III girls soccer final.

Banks then did her part with a pinpoint pass to Gabrielle Root, who connected on a close-range shot for the previously elusive goal. Ninety seconds later, Helix celebrated a 1-0 victory over Mission Vista for its first title since 1998 at Mesa College on Saturday.

“When time was going down, I told my teammates, ‘Calm down. We have this. Just play our game,’” Banks said. “I knew we could take over, and that’s when we scored.”

Banks and Root were among eight players back for fourth-seeded Helix (14-3-6) from the team that bowed in the final two years ago to Serra on penalty kicks. Last season, the Highlanders lost their playoff opener.

“I’m so excited,” said Root, who recorded the only goal allowed by Mission Vista in three postseason games. “It’s the best feeling in the world.”

No. 2 Mission Vista (17-5-2) fell in its first final despite nine saves by sophomore goalkeeper Avrie Fox, who also frequently came out of the net to thwart other opportunities.