Mavericks add another trophy to their case 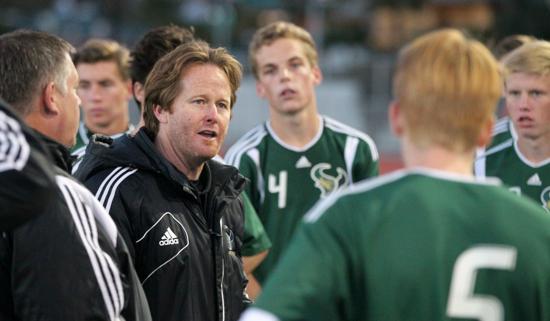 The Mavericks claimed the San Diego Section Division I boys title with a 3-0 victory over Calexico at Mesa College in their eighth appearance in a final. The section crown was the fifth in school history.

“We knew what to expect from Calexico going in, and our boys executed very well,” said La Costa Canyon fourth-year coach Craig Dean. “The biggest thing was not to give up an early goal.”

It was fifth-seeded La Costa Canyon (15-6-4) striking early, scoring in the ninth minute when sophomore forward Jacob Chong converted a rebound off a Calexico defender with a header from the right side.

The right goal post was friendly for the Mavericks in the second half. La Costa Canyon scored in the 48th minute when senior forward Josh Trup launched a rocket cross from deep in the left corner that sailed over the goalkeeper and off the right post into the net for a 2-0 Mavs lead. Just 13 minutes later, it was senior defender Kyle Whatnall scoring from long distance, this on a shot from the center of the field just outside the box that bounced off the right post and in for a commanding three-goal advantage.

“Sometimes in the big games, the breaks go your way,” said Whatnall, a converted forward. “We’ve worked so hard on this journey to get to this. We have great team chemistry, and this is just a great group of guys who love playing for our school.”

None of the top four seeds in Division I advanced past the semifinals. No. 5 seed La Costa Canyon, co-champions of the Avocado West League, bounced No. 1 seed Canyon Crest Academy out of semifinals with 2-1 overtime win.

No. 7 seed Calexico, making its first appearance in the Division I finals, advanced to the championship match by eliminating No. 2 seed and defending Division I champion St. Augustine, 2-1 in the quarterfinals, followed by a 2-0 win over Rancho Buena Vista in the semifinals. The Bulldogs had not lost in their previous 13 matches and brought a five-game win streak into Saturday’s final.

“Most of our guys are three-year varsity players, so we had a good crop this year,” said Calexico coach Javier Bernal, whose team finished the season at 13-4-8. “I’m very proud of them. They fought to the end.”

But the night belonged to the Mavericks and winning goaltender Derik Engebretsen, who made a leaping save off a shot by Calexico’s Fausto Avila in stoppage time to put an exclamation point on the victory.

“We knew a lot about how they play,” Trup said of the Bulldogs. “There was a lot of spacing in the middle of the field. We had a game plan and stuck to it, and We must have had about 70 percent possession.”

And now the Mavericks possess another championship trophy.