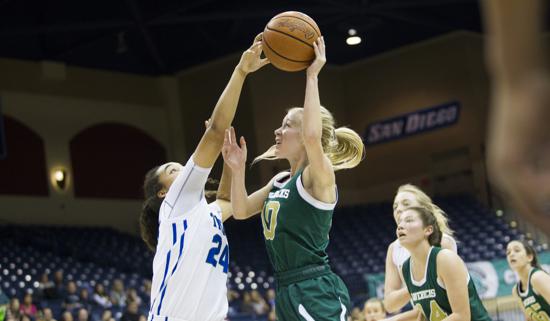 Two minutes before the game, the officials informed Eastlake High guard Jaeda Marsh she would have to remove her lucky knee pads.

“They said mine were black and the others who had them were white, and they had to be the same color,” explained Marsh. “I’ve played every game with them.”

If that shook up the 5-foot-5 senior, she certainly didn’t show it, leading the Titans with 11 points as Eastlake took advantage of a cold-shooting La Costa Canyon team to win the San Diego Section Division I girls basketball title with a 43-23 victory Saturday at USD’s Jenny Craig Pavilion.

The 23 points is the second-lowest total in the Division I title game behind the 22 El Camino scored against RBV in 1998. The combined total of 66 is the fewest ever, surpassing the 69 when Point Loma beat Mira Mesa 44-25 in 1989.

When La Costa Canyon (23-9) shot just 13.1 percent from the field, Eastlake (26-5) took advantage with a 55-38 rebound edge as the Titans outscored the Mavericks 16-7 in the second quarter and then went on an 11-0 run in the third quarter from which LCC never recovered.

“As a team we decided not to get frustrated,” said Marsh, whose team refused to be intimidated by a 13-0 deficit in the semifinals or the larger college court Saturday.

“We needed stellar defense,” coach David Koopman said of the Titans, who last won a title in 2007. “I told them to do all the dirty, ugly stuff no one wants to do.”