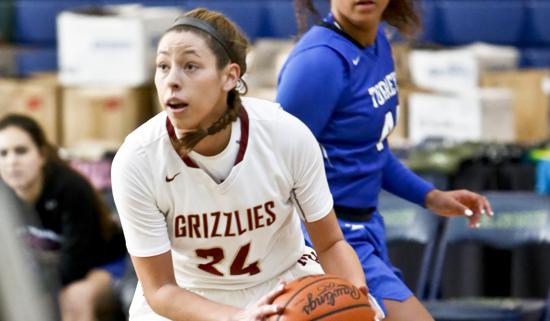 The T-shirts were ordered late, just before the start of the postseason. But they arrived just in time.

On the shirts were two words — Titles Matter.

The last time a team three-peated was in 2003-04-05, when Mount Miguel and Santa Fe Christian both did it.

“This is my favorite win,” said Mission Hills senior Madison Adams, who claimed her third title with 15 points and four rebounds. “I knew we were the better team. My teammates worked harder than they did.

“They talked a lot about us. We did not have to say much. We just showed them who is better.”

In the first half, the score was tied three times and there were nine lead changes before the Grizzlies took a 41-40 halftime lead.

Every time the Torreys (24-5) closed in, Mission Hills responded with free throws or a 3-pointer to stave off the charge.

Senior Monica Todd, who came over from Escondido, scored 13 points off the bench for the Grizzlies, who also got 11 points from Nikki Mayoral and nine points from Olivia Perez in addition to 13 points and seven rebounds from Khayla Rooks.

“This group knows how to win,” Grizzlies coach Chris Kroesch said. “Some of them it’s all they know how to do.”