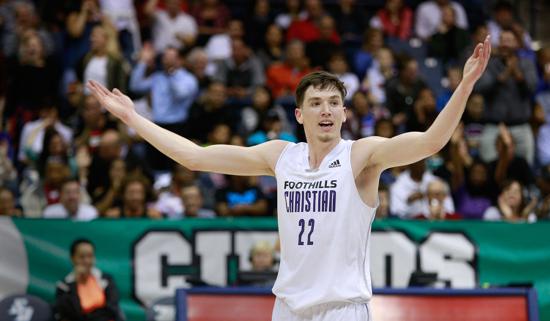 The Knights blew through the Open Division with wins over Grossmont (82-45) and Torrey Pines (71-42) before defeating the Dons.

Budinger, who went on to star at Arizona and is currently with the Indiana Pacers, had 50 points for La Costa Canyon in a Division I win over Eastlake.

“This is the big stage and I was going against a great player in Brandon McCoy, so maybe I was a little more inspired than normal,” Leaf said. “I look forward to a challenge and playing against Brandon was a challenge.

“We hadn’t played them this season, so I was very much looking forward to this.”

In a gesture worthy of two warriors, Leaf and the 7-foot McCoy embraced after McCoy fouled out with 2:53 to play.

McCoy, a junior, finished with 28 points and six rebounds.

“He’s a good dude and an even better player,” Leaf said.

Leaf’s 36 points give him 2,965 career points, passing Budinger (2,934) and Tyrone Shelley, who played at Crawford and Christian, with 2,962 for second place in the county.

The county’s all-time leading scorer is Leaf’s brother Troy, who has 3,318 career points. Troy Leaf went on to star at Azusa Pacific.

Cathedral Catholic trailed just 28-24 midway through the second quarter, then Foothills went on a 14-4 run to push its advantage to 40-26.

“We had a lot of good guys do a lot of good things,” Leaf said. “Jordan Starr (who had 20 points in a semifinal win over Torrey Pines) played great again.

“Luis Salgado hit some big shots and Jordan Van Ommering had a big play that led to a dunk.”

There were 13 dunks in the game, seven by McCoy, four by Leaf.

Foothills, which is 15-0 against San Diego teams this season, has won 28 in a row against competition inside the county.

“This has been going on for four years,” said Foothills coach Brad Leaf. “We lost in the Division V finals back then. This has been a long trek.

“The way the format is now, this is the ultimate.

“There was a fire inside T.J. when he warmed up. I knew they couldn’t stop him tonight.”