Hoffy's boys a keystone combination at Cathedral; Montgomery ready to return as contender 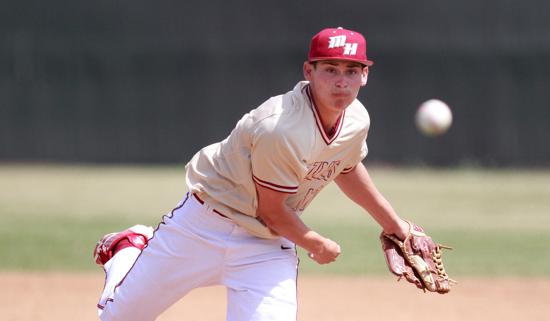 Mission Hills is counting on Avocado East League Pitcher of the Year Cole Riebel, who was was 6-6 with a 2.62 ERA last season.

Top prospect on the mend

Brothers Quinn and Wyatt Hoffman could form the keystone for Cathedral Catholic. Quinn, a senior, has committed to play at Harvard next season. He’s the shortstop. Wyatt, a junior, is a second baseman. Quinn and Wyatt are the sons of former Padres great Trevor Hoffman.

Valhalla’s Cole Henderson is one of the top prospects in the county, having played in the Area Code Games in August. A pitcher-third baseman, he hit .370 last season and had a 2.68 ERA. At 6-foot-4, he averaged 16.0 points, 11.8 rebounds, 3.3 blocked shots and 2.3 assists a game for the Norsemen basketball team.

If Mission Hills is going to make a run at the Avocado East title this season, Jake and Cole Riebel figure to lead the way. Jake, a second baseman, hit .402 last season. Cole was 6-6 with a 2.62 ERA and was the league’s Pitcher of the Year.

After a 13-14 season, Montgomery — one of the top programs in the county — appears poised for a bounce-back season. The talent appears to be there if the team can come together.

University City will play on a new field this season.

Jason Schmeiser turned El Camino around, making the Wildcats a title contender in three years. But Schmeiser was dismissed late last year for reasons school administrators wouldn’t discuss. El Camino has a good team, but can the Wildcats, who backed their departed coach, stay together and win an Avo West title?

The Boras Classic has become one of the top events in the country. La Costa Canyon is the only San Diego school in the 32-team event that starts March 29 and finishes April 1 in Orange County. Top teams in the field include JSerra, Huntington Beach and El Camino Real. LCC’s Mickey Moniak and Blake Rutherford of Chaminade are ranked as two of the best players in the country.

The 66th annual Lions Tournament is set for March 21-24. The 128-team event will be played in nine divisions. The Classic Division features preseason No. 1 Rancho Bernardo, No. 2 La Costa Canyon, No. 3 Cathedral Catholic, No. 4 Eastlake, No. 5 Poway, No. 6 Granite Hills, No. 7 St. Augustine, No. 8 Torrey Pines and No. 9 Helix from San Diego. The top out-of-town teams include El Camino Real, ranked No. 74 in the nation by MaxPreps, and No. 96 West Linn from Oregon. The Classic Division championship is at Cathedral Catholic while the Premier Division is at Cal State San Marcos.

A new tournament this season matches the City Conference against the East County. Play starts March 29 and wraps up with a title game April 9 at Granite Hills High. The Hilltop-Lolita’s Tournament title game is March 19 at Hilltop High. The Saints Bill Whittaker Classic title game is March 17 at Whittaker Field. The 35th annual Pirate Classic wraps up with a championship game March 19 at Oceanside High. The 24-team North County Tournament starts March 28 and finishes April 8 with a 6:30 p.m. game at Escondido High.