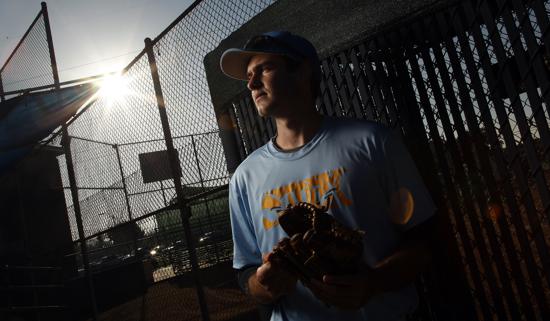 Good players are where you find them.

Major league scouts flock to big college games. There were scouting directors and cross checkers from around the country at San Diego State two weeks ago to see UC Santa Barbara and Kentucky in the Tony Gwynn Classic.

But scouts will turn over all the rocks in pursuit of a prospect.

So sometime in April — when Jonathan Worley is 100 percent healthy — scouts will find their way to the East Clairemont athletic fields, home of San Diego High Tech High.

Worley will be the 6-foot-5 right-hander on the diamond across from the girls softball field. One scout projects a healthy Worley could be taken sometime after the third round of the draft.

“Jonathan is a legitimate prospect,” said High Tech coach Bill Goddard, who played at UC San Diego. “Early on, I played him at shortstop because he can run. And obviously, he can throw. He’s a big-game pitcher.”

Worley throws from a high three-quarter angle and has a fastball that touches 91 mph. He throws a slider with late tight bite, a circle change and a curve he calls “a work in progress.”

Worley has been on the showcase circuit since 2013 and has traveled all over California, Georgia, Florida and Arizona.

He was selected to play in the prestigious Area Code Games last August but didn’t pitch because of an arm injury he suffered in Georgia. That injury was diagnosed as a partially torn ligament.

Starting in November, he was told to rest and rehab for three months.

“I did everything they told me, worked with a chiropractor, and it worked,” Worley said. “The ligament is clean and healed.

“I’ve been able to ramp up my throwing and should be pitching in a game around or just after the Lions Tournament.”

Because of his play in the summer, scouts have a book on Worley. They need to see him again before the June draft, though.

Worley is in a good position no matter what happens this spring. He carries a 4.3 GPA and has signed with Stanford after decommitting from USD.

So, with all this talent, and with great grades, why would he choose to attend High Tech High, a team that has had some success in baseball but will never be confused with the county’s powers?

Students at High Tech are selected by a lottery. There is a project-base curriculum with an emphasis on personalization and adult-world connection.

“My brother is two years older and went to High Tech,” Worley said. “He was very much into robotics. That got my attention.

“My home school is Hoover, and we talked to La Jolla Country Day. But I decided on High Tech because of the project-based learning.

“It’s a little different, but I love it.

“All our coaches are volunteers. No one gets any money.

“School is tough. Our campus is in Point Loma, and we practice and play in Clairemont.

“So we all have to make sure our projects and our partners are in order. Because of all that, we’re a tight team, good friends. We do the best with what we’ve got.”

Their best is pretty good.

The Storm were 14-11 last season before losing in the Division IV playoffs. Worley threw a one-hit shutout with 15 strikeouts in a play-in game against Palo Verde.

“I’ve got to be smart, but I can’t wait to get out there,” Worley said. “I want to help my team. I want to show people I’m healthy.

“I know the draft is out there, but I’m not concerned about that yet.

“My focus is getting back on the mound. The rest will take care of itself.”