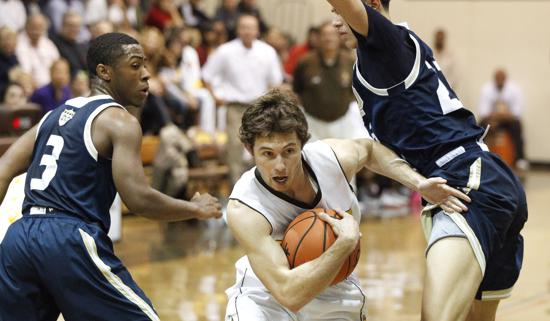 Sean Birk and his El Camino squad are the only local boys team playing at home in the SoCal Regional.

The good news is the San Diego Section got 15 teams into the Southern California Regional for boys basketball, one more than anyone had hoped for.

Foothills Christian, San Diego’s Open Division champion, is seeded No. 5 in an eight-team field and must travel to Santa Ana Mater Dei on Friday.

Certainly the Knights, who have played a national schedule, deserve a better fate. But a 61-53 loss to Mater Dei on Feb. 6 flipped Foothills from a four seed to a fifth and sends them on the road.

Cathedral Catholic, which lost to Foothills Christian in the Open Division championship game, is seeded No. 7 and is on the road against No. 2 Chatsworth Sierra Canyon.

None of San Diego’s other 13 state playoff teams are seeded above eighth in 16-team fields that start play today. Torrey Pines is seeded ninth in Division I, while Bonita Vista is a nine seed in Division V.

El Camino, which lost to Kearny in the San Diego Section Division I championship, is seeded No. 8 in Division IV at the state level and hosts 30-1 Rancho Mirage. A win would probably send the Wildcats to No. 1-seeded Diamond Ranch on Saturday.

The trend is becoming alarmingly clear.

In order to get a better seed and home games at the state level, San Diego Section teams must play and beat Southern Section teams in tournaments and showcase games.

Certainly that has happened this season, but not enough.

Overall, the San Diego boys have one fifth seed, one seventh, one eighth, two ninths, one 10th, three at 11, two at 12, one at 13, two at 14 and one 15th in divisions that are all based on team strength rather than enrollment.

And there will be road trips to Sherman Oaks, Pasadena, Inglewood, La Verne and Huntington Beach.

The San Diego Section girls fared much better than the boys.

Bishop’s is the No. 1 seed in Division I, so it is assured of home games through the semifinals.