Dons call on their depth 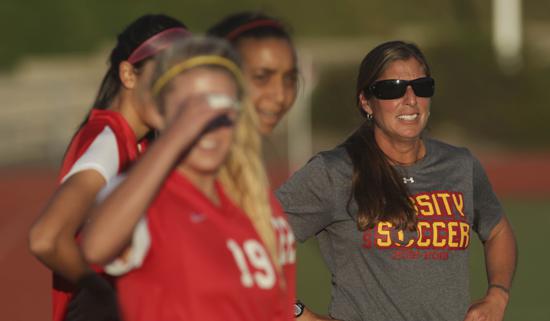 Cathedral Catholic girls soccer coach Dawn Lee has had to shuffle her lineup in the postseason.

The Cathedral Catholic girls soccer team has taken the first step toward a Southern California Regional four-peat championship during a season when it’s also been a supplier of junior talent to the world.

With junior Taylor Sparks contributing the deciding goal and an earlier assist, the top-seeded hosts defeated Riverside King 3-1 in the quarterfinals to start the Division II regional playoffs minus three players away on international commitments Tuesday.

A week ago, when the Dons lost in the San Diego Section Open Division semifinals, they were without five players on national summons.

To the U.S. 18 women’s national team has gone Sunny Dunphy. To the U.S. 16 squad her sister, Sierra, and Maddie Mercado. To Ireland, Niamh Nelson, and to Brazil, Bianca Caetano.

“At the beginning of the season, you pick your stronger players and hope they can fill in to what they have to do at any given moment,” Dons coach Dawn Lee said. “Definitely, we do have the depth.”

Sunny Dunphy is due back from a three-game spell in Spain to play on Thursday, when the Dons (23-4-3) host a semifinal encounter against No. 5 Newbury Park.

Sparks put Cathedral ahead 2-1 against the No. 8 Wolves (21-7-4) with eight minutes left when she converted a close-range shot off an assist from Audrey Hegardt.

“I saw it all come together (on that play), and when I got the ball, I hoped for the best,” said Sparks, a first-year varsity member with 11 goals on the season.. “I’m so happy that it worked it out.”

Emily Knepler and Olivia Erlbeck also scored for the Dons, who responded after King pulled even with 18 minutes to go.