El Camino gets well at home in regional 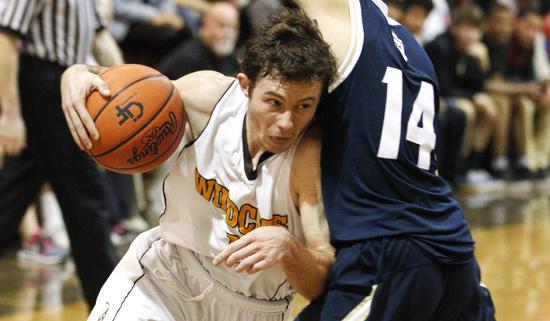 OCEANSIDE — Nothing washes away the taste of a bad loss better than a bounce-back victory.

Embarrassed by its poor shooting in a 23-point loss to Kearny in the San Diego Section Division I finals, El Camino made visiting Rancho Mirage pay, beating the Rattlers 90-66 in a SoCal Regional Division IV first-round game Wednesday.

“We thought our season was over,” said El Camino boys basketball coach Tom Tarantino. “Then we got word we were in.

The Wildcats, who made just 16 baskets against Kearny and shot 30.2 percent, made 31 field goals Wednesday, including eight 3-pointers, and shot 46.9 percent.

“Obviously, playing in our gym helps,” said Tarantino. “Honestly, we were worried. You don’t win 30 games by accident. And Rancho Mirage can score it.

“It took us a while to figure them out. But once we got it going, we were fine.”

El Camino led 27-25 after one quarter but pushed the lead to seven at the half.

A 13-2 run to start the third quarter put the Wildcats up by 18 and the advantage stretched to 28 late in the game.

“We had to forget the Kearny game,” said El Camino senior guard Luke Arvidson. “We looked at this like a new opportunity.

“It was a home game, and we played with some intensity.

“I don’t know what happened against Kearny. We played hard, but we weren’t very focused. We vowed not to let that happen again.”

Ray Johnson, who won more than 700 games as El Camino coach before leaving to take a job as an assistant at Loyola Marymount, saw his first game in the Wildcats gym since he left for LMU two years ago.

“They might not have invited me back if they hadn’t won,” Johnson said.

Division I: Visiting St. Augustine upset No. 5 Corona Centennial 60-59 and in the process the No. 12 Saints earned a home game in the second round Saturday. St. Augustine will host No. 13 Eastvale Roosevelt, which toppled No. 4 L.A. Fairfax.

Division III: No. 15 Kearny, coming off a convincing performance in the section final, ousted No. 2 Huntington Beach Edison 65-58.