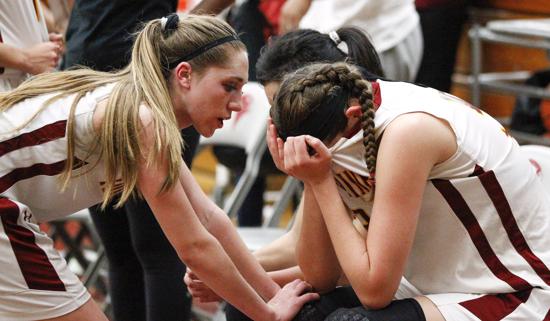 Halfway through the third quarter, it looked as if things were going Torrey Pines’ way.

The Falcons had a five-point lead with 4:15 left in the period, playing on their home court in the first round of the SoCal Regional Division I girls basketball playoffs.

One second later, it all changed thanks to Santa Barbara senior Amber Melgoza.

The 5-foot-10 forward went on a 12-point outburst while Torrey Pines’ offense fell apart in the Dons’ 69-60 victory Wednesday night.

Santa Barbara (27-4) advances to Saturday’s quarterfinals at No. 2 Fullerton Troy.

Melgoza, who is heading to Washington next year, scored 22 of her team-high 34 points during that second-half run.

Melgoza scored 10 straight points to turn that Falcons’ advantage into a 47-42 lead for Santa Barbara.

“They went on another run and we couldn’t answer that time,” Torrey Pines senior Sierra Campisano said. “The difference was they hit shots and we didn’t. It was more us than them.”

Campisano carried the load in the first half, scoring 25 of her team’s 32 first-half points.

The Oregon-bound center tossed in just 10 second-half points, including just two free throws in the fourth quarter while Melgoza scored her final 10 points.

“We’d get a good run going and then we’d be flat,” Torrey Pines coach Denise Bennet said. “It sort of felt like we should have had bigger leads than we did when we were going good.

“I wanted us to get back better on defense in the second half with everyone contributing on offense.”

Point guard Rachel Shen did that with 10 points and 10 rebounds for Torrey Pines.

Besides Melgoza, who also had 14 rebounds, the Dons got 13 points from Alondra Jimenez, 12 points from Jada Howard and 10 points from Sandra Gordon.

All 13 local teams lost in the first round of the SoCal Regional, including top-seeded Bishop’s, which fell at home to Westlake Village Oaks Christian 57-52 in Division I.

The section still has two teams alive, with Mission Hills and La Jolla Country Day set to begin play in the Open Division on Friday.