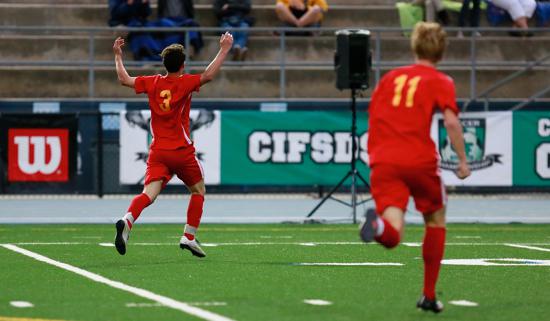 Cathedral Catholic's Nick Giacalone (3), shown celebrating a goal in an earlier game, scored in the first half for the Dons on Thursday.

As first-year members of the two-time San Diego Section Open Division champion, junior Nick Giacalone and sophomore Kane Barton are definitely getting their kicks in the playoffs for the Cathedral Catholic boys soccer team.

Giacalone scored an early first-half goal to get Cathedral going against Santa Barbara in the Southern California Regional Division I semifinals, and Barton added the deciding score in the second half for the hosts in a duel between teams named Dons on Thursday.

The result was a 2-1 victory that sent top-seeded Cathedral (17-6-2) into Saturday’s final at home with a chance to claim the school’s first SoCal boys crown against No. 2 L.A. Loyola.

Giacalone converted in the fifth minute on a tight shot off a deflection from teammate Ryan Chessum for his third goal in the last four playoffs games, half of his season total.

“You’ve gotta come up big in the big games,” Giacalone said. “We’re all a team, but one person has to shine.”

Barton increased the lead to 2-0 with 17 minutes left with an impressive left-footed boot to the opposite post, providing enough cushion to withstand a goal by No. 4 Santa Barbara (23-7-3) five minutes later.

“That was a once-in-a-lifetime shot there, but many more to come,” said Barton, who assisted on an overtime goal in the quarterfinals by his senior brother, Milo.

Cathedral previously reached the SoCal finals in 2008 and 2009, the first two years of the tournament. Two years ago, the Dons missed making the section playoffs.

Junior Juan Beristain scored a golden goal in OT as Mission Hills defeated top-seeded L.A. Cathedral 3-2 in Division III. It was the second straight road win for the No. 5 Grizzlies, who will host No. 6 Pasadena in the finals Saturday.

Senior Abraham Suazo scored a goal in each half for Mission Hills (21-3-3).