Mission Hills clutch in the end 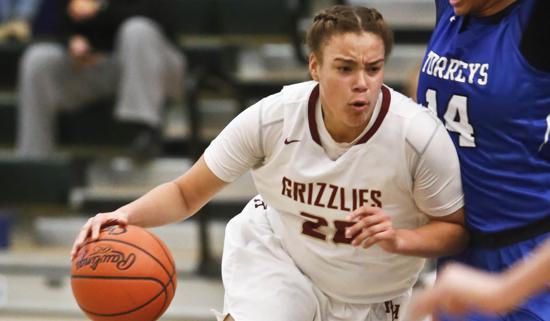 SAN MARCOS — With 1.2 seconds left in the game, Mission Hills’ Khayla Rooks stood at the free-throw line with the outcome still up in the air.

The junior forward, unlike most players, felt no pressure, even with just a two-point lead.

“I was thinking more about the free throws I missed before those last two,” Rooks said. “It never felt like the state playoffs.

“It felt like just a regular moment to me.”

By winning, the three-time San Diego Section champions advance to Tuesday’s regional semifinals at No. 1 West Hills Chaminade, a 79-67 winner over No. 8 Palisades.

The 19th consecutive win for the No. 4-seeded Grizzlies (29-3) came despite a poor shooting night. Only one Grizzly hit in double figures.

Rooks, who scored eight of her team’s 10 fourth-quarter points, took game-scoring honors with 26 points to go with her 12 rebounds and one block.

“My shots were falling in pregame,” Rooks said. “We knew they couldn’t handle me in the post, so we went in there more than normal.”

Mission Hills never trailed after retaking the lead for the final time at 33-32 with 3:31 left in the third quarter.

Of course, the basket that put Mission Hills ahead to stay came from Rooks.

“We found a way to get it done,” Mission Hills coach Chris Kroesch said. “We couldn’t hit the broad side of a barn most of the game.

“One thing I know is these girls hate to lose.”

Windward, coached by former Carlsbad High standout Vanessa Nygaard, went the final 3:50 of the third quarter without a point, though the Grizzlies managed just six points in that span.

“We have had a tendency to do that, lose the momentum for a while,” Kroesch said. “We have to sharpen that up before we play again.”

Shooting just 17 of 52 from the field, Windward was led by freshman Charisma Osborne with 15 points and Jasmine Blevins with 12 points. Osborne topped her team with eight rebounds.