Foothills Christian defense does the job 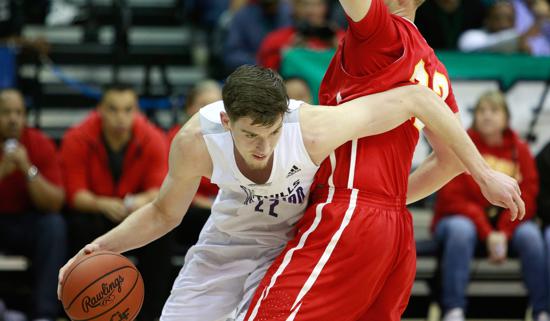 The hard work paid off as the Knights traveled two hours through the rain Friday, played in a hostile environment and upset the Monarchs 50-46 in the SoCal Regional Open Division quarterfinals by playing great defense.

Next up for fifth-seeded Foothill Christian (25-4) is Chino Hills, the No. 1-ranked team in the nation on Tuesday.

The Knights have played unbeaten Chino Hills twice, losing by 20, then by two.

“We had to adjust from that first game,” said Leaf. “We had to back off on their 3-point shooters. Last game we ran out on them and left things open underneath.

“Tonight they were going to have to beat us from long range.”

The Monarchs made five shots from behind the arc, but missed 20.

“Honestly, it was fun going against him. I did everything I could, but my teammates stepped up.”

Senior point guard Nikko Paranada, who was playing with a bad ankle when these teams met in February, finished with 14 points and had five rebounds.

He had a huge 3-pointer in the fourth quarter and sank a pair of free throws with 22 seconds left as Mater Dei tried to crawl back in the game.

“We hold a team to 50 points, we usually win that game,” said Mater Dei coach Gary McKnight. “Leaf is of one of the best players I’ve seen this year. He’s very consistent. He scored inside. He scored outside.

Foothills grabbed a 4-2 lead on a Paranada basket midway through a slow first quarter and the Knights never trailed after that.

They led by 10 at the half, but Mater Dei tied it at 26 midway through the third quarter.

But a Leaf basket and Paranada’s free throws kept Mater Dei at bay.

“They don’t lose too many games here,” T.J. Leaf said. “Outside of our locker I don’t think anyone thought we could win.

“But we believed. And we made it happen.”