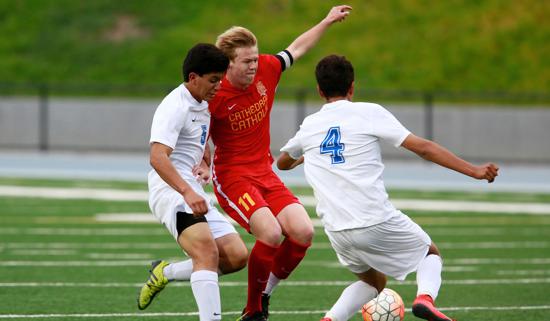 To start the second half of the Southern California Regional Division I boys soccer final, Cathedral Catholic chased balls that went out of bounds with added effort.

Every second counts for a team down by a goal while seeking its first SoCal crown.

Alas for the top-seeded hosts, the deficit eventually grew and time expired. Los Angeles Loyola prevailed 2-0 for its second title in three years on Saturday.

So ended the season for the Dons (17-7-6), who won a repeat San Diego Section Open Division championship this season, two years after not even making the section playoffs.

“They were the better team out there,” said Dons senior Milo Barton, a forward set to play next for UC Santa Barbara. “For the season, we did well, winning the Open and getting here. For some of the players, this was the last game of their career. It all kicked in for them (during the playoffs).”

No. 2 Loyola (29-4) went ahead in the 25th minute and scored again in the 25th minute of the second half. In between, Dons freshman goalkeeper Aidan Cerveny kept matters close with one leaping stop and later a deflection that bounced off the crossbar and stayed out.

“When you’re down a goal, you’re always in it,” Dons coach Nate Hetherington said. “Then they got that second goal, and it made the uphill battle a little further out of reach.”

On the way to the final, the Cubs topped San Pasqual in the quarterfinals. Two years ago, they beat Carlsbad for the title.