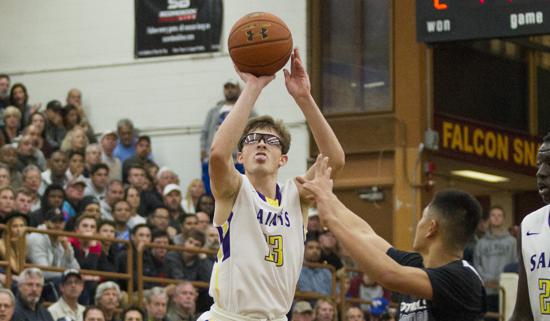 Eric Monroe and Martin Tombe are “the heart and soul” of the St. Augustine boys basketball team, according to coach Mike Haupt.

Scoreless in the first half, Tombe accounted for all 12 of his points in the final 16 minutes, while Monroe — the team’s point guard — finished with 11 points and a team-high seven rebounds to lead the Saints to a come-from-behind 54-52 win over Eastvale Eleanor Roosevelt in the SoCal Regional Division I quarterfinals in St. Augustine’s Hoosiers-type gym.

The Saints, who only play league games in their gym, haven’t lost at home in four years. They hope to be in a new gym at playoff time next season.

Next up for 12th-seeded St. Augustine (24-7) is a trip to top-seeded Encino Crespi on Tuesday.

“This time of season, knowing we don’t have that much time left together, is special,” Monroe said. “We’re the seniors. We’re the leaders. It’s up to us to step up and lead.”

The Saints trailed No. 13 Roosevelt 22-13 with three minutes left in the half. But a 19-4 run over the next eight minutes saw the Saints go up by six.

They stretched that to eight with 3:45 to play, but Roosevelt (23-9) wasn’t finished. The Mustangs cut the deficit to two with 44 seconds to play. And when Jack Peterson’s 3-point attempt rattled in and out, the Mustangs had one final chance with 14 seconds remaining.

“We thought they’d try to get it to No. 3 (Jemarl Baker),” Haupt said. “But we did a good job on him and they may not have run the play right.”

At the buzzer, Alize Travis was forced to take a long 3-point attempt that missed.

“There is no panic in this team, so I didn’t panic in the first half,” Tombe said. “I can do other things if I’m not scoring.

“I knew it would come. I knew the guys would find me.”

Monroe and Tombe singled out Tariq Thompson, who scored 11 points — seven in the 19-4 run for his play.

Thompson was picking up minutes for Otto Taylor, who is out with a knee injury.

“Roosevelt is so strong, so physical,” Haupt said. “And No. 23 (Matt Mitchell) is a man. This was a fight and early on they took it to us.

“But our guys are resilient. We settled down, went on a nice run and got it done against a very good team.”

Tombe led St. Augustine with 12 points, while Monroe, Thompson and Taeshon Cherry all had 11.

Mitchell led Roosevelt with 22 points and 14 rebounds. Baker added 16 points for the Mustangs.