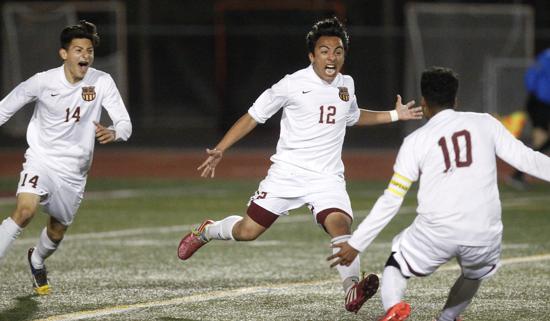 SAN MARCOS — Just when Mission Hills’ season looked like it was going to end on a downer, the Grizzlies were given a lifeline and grabbed it.

The win earned the host Grizzlies (22-3-3) their first regional championship a week after they won their first San Diego Section title.

“It’s great,” Munoz said. “This is what we wanted all year long. We worked hard for it.”

The Grizzlies, the San Diego Section Division III champions, won their final nine games, including matches against top-seeded Los Angeles Cathedral and No. 4 Ontario Chaffey in the regional tournament.

“I told them after we beat Cathedral, ‘When you get to this point, everyone is at the same level. The one thing that is going to get you through is heart and not quitting on each other,’” Mission Hills coach Jacob English said. “That’s what they did tonight. They played with heart. I love them.”

Junior Giovanni Alavez put Mission Hills ahead in the 70th minute, but Pasadena equalized through senior Duncan Schwartz in the 78th minute.

One minute later, the Bulldogs (21-2-3), who lost for the first time since Jan. 19, were awarded a spot kick after Grizzlies senior Luis Valdovinos handled the ball on the line, preventing a goal and getting a red card.