Cathedral Catholic out of gas at the end 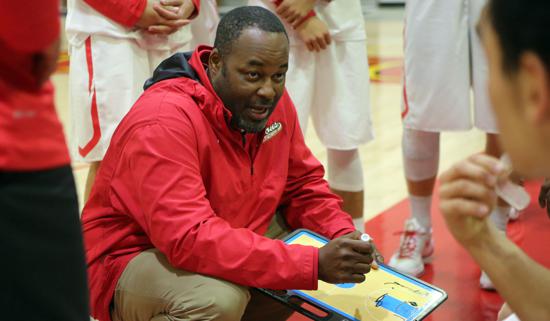 Cathedral Catholic coach Will Cunningham guided the Dons to a 21-6 record and the SoCal Regional Open Division semifinals this season.

TORRANCE — With just one quarter left, Cathedral Catholic was right where the Dons wanted to be.

Only eight minutes remained in the Southern California Regional semifinal and the seventh-seeded Dons trailed No. 3 Torrance Bishop Montgomery by four points.

But the final quarter was all Bishop Montgomery.

The Knights, Division IV state champions in 2014, hit six of their 10 3-pointers to turn a close game at El Camino College into a rout at the end with Bishop Montgomery ousting Cathedral Catholic 72-56 from the Open Division boys basketball playoffs Tuesday.

Bishop Montgomery (28-2), a team without a senior starter, advances to Saturday’s regional final at the Pyramid in Long Beach against No. 1 Chino Hills.

Eight minutes is all that separated the Dons (21-7) from possibly making that trip.

“We were right where we wanted to be after three quarters,” Dons coach Will Cunningham said. “We did some uncharacteristic things and they got some really good looks at the basket.”

The Knights outscored Cathedral Catholic 26-14 in the final quarter.

“This year was a good accomplishment where we started the season,” added Cunningham. “To be in the final eight is quite a big deal, especially in the Open Division.”

Behind 15 points from 7-foot junior center Brandon McCoy, the Dons trailed just 36-30 at halftime, and senior Austin Beech’s six points in the third quarter had Cathedral on the verge of a fifth win in its last six outings.

A 19-4 start to the fourth quarter had Bishop Montgomery, which had just four 3-pointers through three quarters, all but clinching the win halfway through the period.

“We were losing energy in the fourth quarter,” Dons senior guard Cameron Moore said. “That’s what happened to our defense. We pride ourselves on defense, but they hit a few shots and took off from there.

“Basketball is a game of runs. They did that in the fourth quarter.”

Bishop Montgomery got 24 points from David Singleton, who had 11 points in the final quarter, and 21 points from Jordan Schakel.

The tallest player for Bishop Montgomery is 6-6 to face 7-footer Brandon McCoy of Cathedral Catholic.

No. 3 Torrance Bishop Montgomery (27-2) is a four-time Del Rey League champion that won the Division IV state championship in 2014.