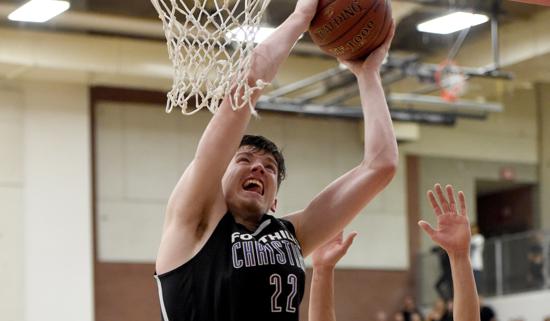 Hyped as a high-scoring outfit, and rightfully so, Chino Hills — ranked No. 1 in the nation — also plays defense and rebounds.

Foothills Christian couldn’t combat that combination as the Huskies ran away from the Knights, winning the Southern California Regional Open Division boys basketball semifinal 82-62 on Tuesday in the 2,500-seat Colony High gym.

Led by the Ball brothers — Lonzo, LaMelo and LiAngelo — Chino Hills improved to 33-0; it will face Torrance Bishop Montgomery on Saturday at Long Beach State’s Pyramid.

Foothills Christian (25-6) kept the game close, trailing 19-16 at the end of the first quarter and 37-30 at halftime. But Chino Hills stretched the advantage to 14 at the end of three quarters and coasted home.

“We gave it everything we had,” Foothills coach Brad Leaf said. “But the freshman (Onyeka Okongwu) was so much better than the first two times we played them (20- and two-point losses).

“We held him to six and eight points before. We left him unguarded tonight, and he made us pay.”

Okongwu finished with 19 points and 11 rebounds.

“It took all five guys to guard him, though.”

The UCLA-bound Leaf finished his last high school game with 36 points and 15 rebounds.

He concludes his high school career with 3,022 points and 1,476 rebounds. Both are second all-time in the San Diego Section.

“It’s awesome that Troy and I are one-two,” T.J. said. “I grew up watching him. He’s the guy who helped mold me.

“This is really pretty cool.”

T.J. Leaf fought back tears after the game as he sat at his locker.

“This team plays with so much heart, in games and practice,” T.J. said. “But Chino Hills is really good. They press, they defend. They’re really good.”

The Ball brothers were 17 of 57 shooting. UCLA-bound, 6-foot-6 Lonzo led the way with 23 points, junior LiAngelo had 14, and freshman LaMelo seven.

Elizjah Scott added 19 for the Huskies.

“T.J. is the best player I’ve played against,” Okongwu said. “He’s tough to defend. We tried our best to contain him, but he’s pretty darn good.”

Point guard Nikko Paranada had seven points for the Knights as Chino Hills closed out quickly on Foothills’ 3-point shooters.

“What this team is doing is special,” Baik said. “I never thought it would get this crazy, but this group has lived up to the hype.”