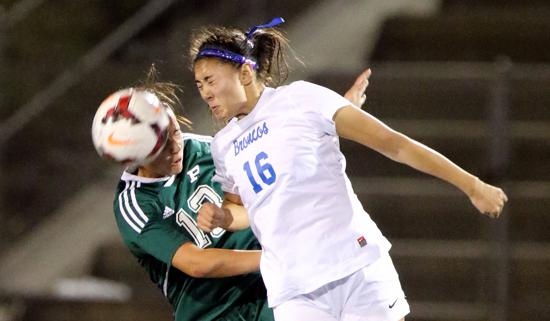 For Amanda Roy of Rancho Bernardo it wasn’t until Senior Night that her Broncos soccer career had dwindled to a precious few games.

“That was the night the realization hit me,” Roy said. “With the playoffs, I probably played my last home game on a field I’d been coming to play on for years.

“It finally hit me and I honestly had not thought about it until that point.”

Roy’s playing days are not over, though. The 5-foot-7 center midfielder, who earned All-San Diego Section first-team honors, will continue her career next year at UC Riverside.

“It’s all pretty surreal,” Roy said heading into the playoffs. “I just want to leave my 110 percent on the field every game, play it as if it’s my last one as a Bronco.”

For the first time this season, Rancho Bernardo qualified for the San Diego Section’s tough Open Division, finishing as runner-up to Torrey Pines in the championship game.

“I like playing against the best of the best in the county,” Roy said. “You have to face the challenge and play to your best every day.

“For me, the focus is always on playing the very next game. Play it, win it and move on.”

The Broncos finished the season with a 14-8-3 record, eliminated by Santa Margarita in the Southern California Regional playoffs.

Roy started playing soccer in a rec league when her parents signed up her and older brother Ryan. She tried basketball, volleyball and even tennis but eventually discarded them all for soccer.

“I don’t know if I loved soccer at first, but I love it now,” Roy said. “There are so many different aspects of the game.

“That’s a lot more difficult to master. I went to a lot of camps and clinics and got private lessons to improve my skills.”

One of Roy’s best moments on the soccer pitch came last year in a game at Westview. The Broncos drew a foul and Roy said she took a free kick about 40 yards from the goal.

“Their goalie was busy setting up her defenders and wasn’t paying that much attention to me,” Roy recalled. “I kind of quick-kicked it and it went in.”

It was one of her five goals on the season.

“I was just trying to kick it in close so a teammate could maybe do something with it,” Roy said. “I never expected to hit it in.”