She knows the value of hard work 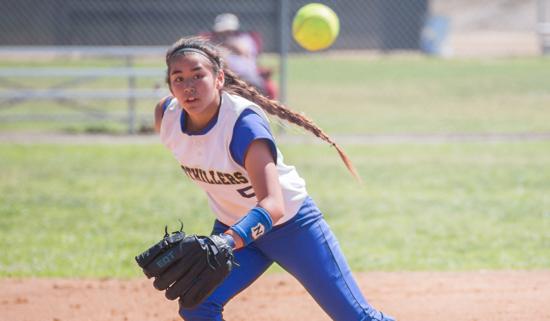 EL CAJON — To succeed, a good athlete needs an edge. For Grossmont High School junior third-baseman Chloe Camarero, her edge is inside her, driving her in everything she does.

“I’m very competitive; I always want to win,” said Camarero. “I always try my best to outwork the girls next to me. I want everyone to work hard and give 110 percent; leave it all on the field.”

Last year the 5-foot-3-inch, 117-pounder drove herself to 1st Team All-CIF honors, 1st Team All-East County Team, 1st Team All-League, Player of the Year for the Grossmont Valley Conference and MVP of her team. She posted a .543 average with 35 runs batted in; despite batting from the lead off position.

“She is the hardest worker we have,” said longtime Grossmont Head Coach Jerry Lerud. “Nothing distracts her; she’s always calm.”

Camarero started playing softball and soccer when she was just 5. It was her first and most loyal coach who instilled this work ethic – her father Alonzo.

“My dad is the hardest working man I’ve ever known,” Camarero said. Her father was a Holtville wrestler who played baseball at UCSD, stopped to concentrate on his school work, transferred to SDSU and now works as a computer engineer. “It takes a lot of hours away from the field to prepare. We do something every night. I hit in the cages; he pitches live to me. It’s good we have the cages here at the field to work with, and we have the lights we can use if we want to go late.”

Camarero began competing in the Navajo Girls Fastpitch League. Her father would coach her every other year, giving her a chance to learn from other coaches. In 2012 she joined her first club team, the 14-Under San Diego Renegades. She moved onto the 16-Under Power Surge in 2014 and now competes for the 18-Under Gold SoCal Breakers.

In soccer, she earned 2nd team all-league honors for the Foothillers. To concentrate more on softball, she no longer competes in club soccer, playing just for the school.

“(Soccer) helps me stay in shape,” she said. “You can really concentrate on your footwork – going side-to-side.”

But what happens when she gets frustrated on the soccer pitch?

“I go hit,” she quickly responded. “Whenever I get frustrated in anything, I hit the cages.”

Through nine games this year, Camarero’s numbers are again impressive. She has 16 hits in 29 at bats for a .552 average. She has six doubles, one triple and leads the team with two home runs and five RBI.

Her numbers are equally impressive in the classroom, carrying a GPA of around 4.0.

“I have to work hard for grades. They just don’t come easy for me,” she said.

“I visited there twice before I committed,” said Camarero, who also visited Lehigh in Pennsylvania. “I really clicked with the girls on the team. It felt like ‘home.’”

“It’s such a beautiful atmosphere. It snows there – I’m so excited for that. But they have indoor facilities.”

The future is bright at Weber State under Amicone. In just her second season last year, the Wildcats posted a 38-19 record, winning the school’s first Big Sky Conference title and a trip to the NCAA Regionals in Lafayette, La.

“(Amicone) said there’s a great chance I’ll be able to lead off and play third, just like I do now,” said Camarero. “I just can’t let up.”