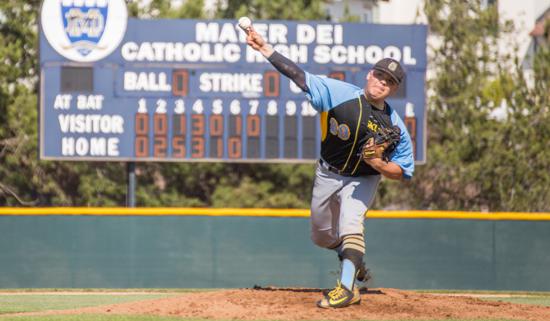 Senior Conrado Diaz does a bit of everything for San Ysidro. That includes pitching, catching and supplying a big bat in the lineup.

What a difference a year makes.

At this time in 2015, San Ysidro’s baseball team was about to embark on a 22-game winning streak that would culminate with a 7-2 victory over La Jolla allowing the Cougars to lift a Division II championship banner.

Leading the way was catcher Conrado Diaz who batted .418, driving in almost as many runs (40) as he had hits (41), including 10 doubles and eight home runs.

There were also 10 seniors on that team a year ago and when Diaz showed up for the first practice this year, there was only one other full-time starter plus two players who had platooned.

“Right now my teammates don’t have the experience. They’re scared to make a mistake,” said Diaz of the team that has three freshmen, five sophomores, five juniors and only five seniors. “In practice, they do things right, but in games, they get nervous.

“Last year we were ready to play ball every game. All we worried about was how many runs we’d score — if we could get to 20 — not about what might happen win or lose.”

The 5-9, 200-pound Diaz, who came to San Ysidro from Tijuana as a freshman and is closing in on 100 RBI and 150 hits in his high school career. He even hit for the cycle last year against Mar Vista.

Opponents took one look at the young Cougars this year and promptly pitched around Diaz. He walked 10 times in the first eight games. When they did give him something to hit, he batted .500.

He continues to shine behind the plate where in his first three years he committed six errors in 95 games. He has not had an error this season.

But the Cougars are struggling to find their way. In the Lions Tournament they looked like their old selves, scoring 21 runs against San Pasqual. Then they allowed 22 runs the next two games, both losses.

“When I was a freshman (he was the CalHi Freshman of the Year), I didn’t even know what the CIF championship meant, but after we won (the Division III) title, I knew I wanted to do that again,” Diaz said. “We had a good team my sophomore year but last year was really fun. I’m trying to teach the younger kids how important every play is and to just relax, but it takes time.”

Diaz himself is trying not to get caught looking ahead.

At 5-foot-9, major league scouts aren’t completely convinced he can physically hold up, but few can deny his ability with the bat and he has played several other positions on traveling teams.

For the Cougars, he’s even pitching some this year.

“I think he’s the best player in the county,” said his coach, Ken Canche. “It’ll all depend if a major league team wants to risk a draft choice on him. He’s faced the best in the nation with travel ball, and he’s always been the best in the biggest competition.

“Remember, this is a kid who in his first two at bats as a freshman against Grossmont hit the ball out of the park. He has a natural swing and over the summer he worked at hitting the ball to the opposite field.

“If he isn’t drafted, he’ll go to college and after two years if he gets in the right program, everyone will know how good he really is.”

Diaz has another goal—playing for Mexico in the Olympics.

“I went to two World Series when I lived in Mexico and we lost to Cuba,” he said. “As a 12-year-old I won the ‘Champion Bat’ as the best hitter, and I received Gold Gloves for my catching. The Olympics would be fun.”