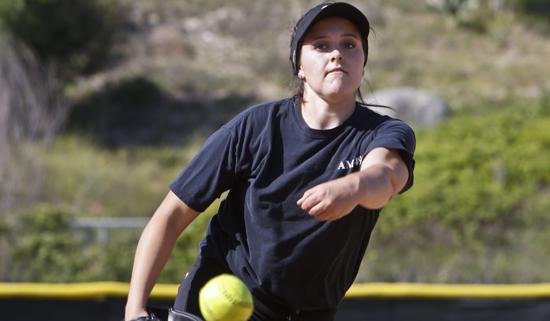 In addition to pitching, Shelby Smith is a threat at the plate with a .433 average.

VALLEY CENTER — When pitcher-first baseman Shelby Smith gets mad during a softball game, watch out.

Unlike most athletes whose games suffer under stress, the Valley Center High left-hander actually gets a little better.

“Getting mad makes me focus a little harder,” Smith said. “Coach (Bill Dunckel) always tries to get in my head so I start out a game mad.”

Angry or not, Smith has been a model of consistency once she reached the varsity as a sophomore after splitting time between varsity and JV as a freshman.

In Smith’s mind, there’s no question which is her favorite part of the game.

“I love being in the circle,” she said. “Everyone’s eyes are on me. I’ve been there since I was 8.

“I’m used to handling that stress. At times, it gets hard, but I still enjoy it more than I would if I just played first base all the time.”

Along the way, Smith has perfected her demeanor during games, especially when she’s pitching.

“There’s more to pitching than throwing the ball up there,” Smith said. “You can’t show any emotion. Dad said I’ve always been good at hiding emotions.

“The worst mistake a pitcher can make is bringing your teammates’ heads down by yelling at them for making a mistake. I don’t like it when someone yells at me for a bad pitch.

“It’s all about positive reinforcement.”

Smith recalled a moment when she lost that trademark composure.

“This pitcher hit me with a pitch for the second time in a game, and it was in the head,” Smith said with a laugh. “I stared at her the whole way to first base.

“My teammates were in the dugout laughing the whole time.”

In addition to playing softball for Valley Center and the SoCal Breakers travel team — plus carrying a course load that includes several Advanced Placement classes — Smith also plays basketball for the Jaguars.

“I started playing in fourth grade at the Boys & Girls Club,” Smith said. “I love being in a contact sport that is also a pure team sport.

“I thought I would make the varsity as a freshman, but I never expected to start.”

The 5-foot-6 Smith hit 42 3-pointers this season, including seven in one game.

After graduation, Smith plans to focus on the medical field, perhaps as a pediatrician or a nurse.

Getting madder and madder.